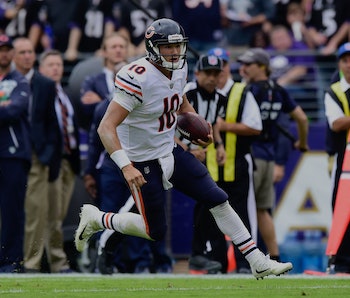 It’s Mitch Trubisky fever — catch it! The University of North Carolina product and number one overall pick has looked solid in his first two games, getting his first win last week. Can he keep it going against a Panthers team that looks fully capable of rediscovering its 2015 Super Bowl form? A hive mind of NFL fans is doubtful, picking the Panthers to win Sunday.

If the Bears want to get the second win of the Trubisky era, they will need to get past a stout Panthers defense. Since it feels fair to say Trubisky isn’t Cam Newton — who looked like a superstar even as a rookie — it’s probably going to come down to how well the Bears can run against the Panthers, which… yeah, good luck with that. That’s especially true when the Panthers have been something of a road juggernaut, putting up nearly double the points on the road as they have had at home.

The hive mind has little doubt of the outcome here, picking the Carolina Panthers with high confidence and 80 percent brainpower, with most of the remainder just picking Carolina with low confidence.

The 3.5-point spread didn’t change too many minds within the swarm, with the Panthers remaining the high confidence pick. The 78 percent brainpower isn’t the highest, though.

More like this
Innovation
Jan. 19, 2023
A robot choreographer reveals why M3GAN — and all robots — should dance
By Molly Glick
Science
5 hours ago
ChatGPT could help students cheat — but it could also revolutionize education
By The Conversation and Sam Illingworth
Innovation
Jan. 25, 2023
Starship orbital flight: SpaceX successfully loaded the rocket with over 10 million pounds of propellant
By Mike Brown and Molly Glick
LEARN SOMETHING NEW EVERY DAY.
Related Tags
Share: