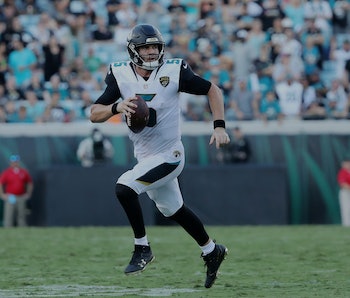 The Jacksonville Jaguars sit at 3-3 on the year, which still makes them the most dangerous Jaguars team in about a decade. The Indianapolis Colts continue to struggle without injured quarterback Andrew Luck. A hive mind of about 30 NFL fans predicts the Jaguars will win their game Sunday.

If that’s the case, it won’t just mean the Jaguars doubled the win total from last year’s 2-14 campaign in less than half a season. It will also mean they won their first game in Indianapolis in five years. Sure, the Colts aren’t themselves without Luck, but then the Jaguars aren’t who they used to be either. Rookie running back Leonard Fournette is the engine behind the NFL’s best rushing attack, and any contributions from quarterback Blake Bortles could push the Jaguars to that next level.

The hive mind is decisive in picking the road team to win here, choosing the Jaguars with high confidence and 84 percent collective brainpower behind the decision.

The addition of a three-point spread doesn’t deter the swarm, as they again pick the Jaguars with high confidence and a reasonable 85 percent collective brainpower. This is quietly one of the hive mind’s more definite picks this week.

More like this
Innovation
8.5.2022 11:00 AM
Alexa could diagnose Alzheimer’s and other brain conditions — should it?
By Joanna Thompson
Science
7.23.2022 11:00 AM
Astronomers have an ambitious plan to discover the first light in the universe
By Kiona Smith
Mind and Body
7.27.2022 2:00 PM
Too hot to run outside? Sports scientists share 7 tips to break a sweat safely
By Ash Willmott, Justin Roberts, Oliver Gibson and The Conversation
Related Tags
Share: