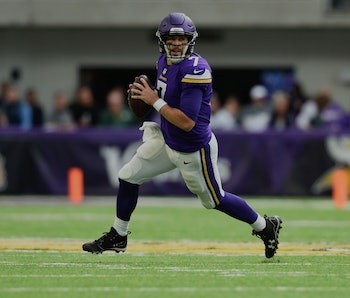 The Minnesota Vikings looked lost when Sam Bradford went down with injury, but they have rattled off consecutive victories against division foes with backup Case Keenum. Can they get to a surprising 5-2 with a win over the Baltimore Ravens? A hive mind of about 30 NFL fans likes their chances, predicting the Vikings will win their game Sunday.

The big turning point, awful as it is, came in the Vikings’ game last week against the Packers, when a hard hit on quarterback Aaron Rodgers handed him a potentially season-ending injury. That has opened up the NFC North for an upstart champion, and the Vikings could fit the bill if they find ways to keep winning. The Baltimore Ravens have had serious offensive woes of late, dropping three of their past four games.

The swarm moved swiftly toward picking Minnesota, albeit only with low confidence. The 82 percent collective brainpower behind the pick represents decent consensus behind the choice.

The addition of the 5.5-point spread makes the swarm far slower to pick, ultimately going with Minnesota again with low confidence. The brainpower plummeted to just 63 percent, though, so stay far away from this one, basically.