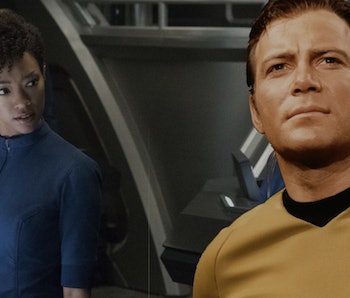 For some old-school fans, Star Trek: Discovery is going darker than they would like, leading them to condemn the show as not being “real” Star Trek. But is it really all that dark? If you look closely, the show isn’t so much “dark” as it is “complex.”

Discovery might seem “dark” to some because it’s the first Trek show to exist in a culture that truly expects complexity in its prestige-adjacent television. And because of that, Discovery is achieving the things The Original Series never could.

The nature of television has changed since the original Star Trek series premiered in 1966. At the time, audiences understood that watching William Shatner’s Captain Kirk “fight” (read: flail about like a magnificent fish out of water) low-budget baddies wasn’t necessarily realistic, but it was accepted as the norm; television shows didn’t have big bucks to spend on blow-out fights, and that was fine.

But this is the 21st century, a time marked by Netflix shilling out $8 billion-worth of content and Oscar winners taking on television; prestige TV is the norm, so why wouldn’t Star Trek follow the trend?

Just as the now-famed fight scenes of Trek series past are just that — a thing of the past — Star Trek’s plots and characters have also grown more complicated with Star Trek: Discovery. One-off sit-com-style television absolutely still has its place and can still deliver meaningful messages while implementing a laugh track, but Trek has moved beyond that. Trek series post-Original Series, especially Star Trek: Deep Space Nine, started migrating away from one-off storylines that didn’t realistically affect their characters, sure, but Discovery takes that to a whole new level.

During the Discovery panel at New York Comic-Con 2017, series executive producer Akiva Goldsman spoke to the idea of fans calling Discovery the “darkest” Star Trek series yet. Because of Trek’s newly realized penchant for focusing on characters’ personal pain, the kind that doesn’t dissipate after a quick chat with the ship’s chief medical officer, some fans feel betrayed by Discovery’s “darkness.”

Goldsman said Discovery “is actually relatively different from what you would talk about in most previous Star Treks — that would be different for DS9 — and why that is relevant is because we are a wholly serialized narrative. And due to that wholly serialized narrative we get to tell character stories over plot, which does not suggest we don’t have plot, but if Jim Kirk had to deal with Edith Keeler’s death in ‘City on the Edge of Forever’ as if it were real, it would take a season or a series. It wouldn’t be fun next week.”

For those who need a reminder: in TOS, Captain Kirk and Spock got stranded in 1930 in New York City where Kirk fell madly in love with a woman named Edith. Portrayed by Joan Collins, Edith was a social worker who Doctor McCoy accidentally saved from a traffic accident, effectively altering the timeline and allowing Germany to win World War II and take over the world (it’s a long story). In short, Kirk and Spock were charged with fixing the timeline, which meant letting Edith die.

When she did die, Kirk was relatably distraught. For a while, that is. He moved on alarmingly fast, in the kind of way only a television character with an audience to entertain truly can.

That’s not a bad thing, per se. In fact, that’s exactly what people expected of Star Trek — no one wanted to see a depressed Kirk moping about the U.S.S. Enterprise. But, now, that’s… kind of what the people want.

As Goldsman pointed out at Comic-Con, Discovery is Star Trek for (ahem) the next generation.

“The gift that we have — because of where we are when it comes to contemporary storytelling — is we can stretch those emotions [the kind Kirk felt over Edith’s death] out for a season,” Goldsman said. “Ours is a story of redemption, our is the origin of the feeling that is TOS. That’s why we are 10 years before TOS.”

But Discovery doesn’t start in the same place as TOS. Discovery starts as a war origin story before flying into battle at warp speed. Discovery is making way for the ultimately carefree feeling of TOS.

“The name of the show is ‘Discovery’ not by accident,” Goldsman said. “It is how these people discover who they are and… how the Federation reaffirms who it is. So in long-form storytelling, you get the gift of getting to start somewhere, which is different from where you end up.”

Discovery is both dark and light, Goldsman said. Star Trek has always had hints of darkness; Discovery has just been given the privilege to explore the world Trek fans love that much more. It’s not dark. It’s just complex.