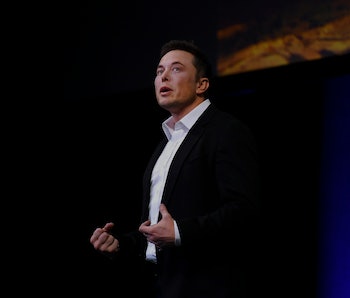 No American knows more about outer space than Scott Kelly. The retired NASA astronaut spent a record-breaking 520 days in space across four missions, including 340 straight days on the International Space Station. So if anyone is an expert on long-haul space missions — like, say, Elon Musk’s planned trips to Mars — it’s him. And he’s a fan.

In an appearance on CNBC’s Squawk Box, Kelly revealed he had once been skeptical of SpaceX, but seeing the company successfully land rockets on their autonomous barges had turned him around.

“When Elon Musk said he was going to launch his rocket and then land the first stage on a barge, I thought he was crazy,” Kelly said Tuesday. “And then he did it. So I’m not going to ever doubt what he says, ever again.”

One of the hosts pointed out Musk’s Mars plans don’t necessarily make sense from a business perspective, saying there’s no profit to be had in going to the red planet.

“Generally, big projects that don’t have an immediate return on your investment is something that governments do,” Kelly said, though he pointed out NASA and SpaceX already have a close working relationship. “We support SpaceX in their development of a transportation system to low Earth orbit.”

As for the nearer term, Kelly endorsed Musk’s recently unveiled plans to build a transportation system that can connect anywhere on Earth in under an hour using rocket flights.

“If you can get into suborbital space safely, regularly, then potentially you could fly from L.A. to the United Kingdom in 45 minutes,” Kelly said. “Part of it is transportation system to support NASA, part of it is space tourism,” with this, he said, being the third part of the space exploration efforts of Musk and competitors like Richard Branson and Jeff Bezos.

When asked how soon such a system could be built, Kelly said he hoped it could happen within his lifetime, perhaps as soon as the next 30 years.

If you liked this article, check out this video of a high-tech bear den for astronaut “hibernation.”