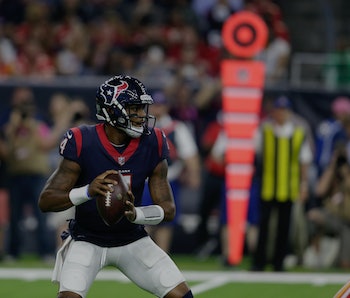 If you allow for the “currently healthy” proviso, Houston Texans rookie Deshaun Watson might already be the best quarterback in the AFC South. He was a star in college, and he has looked like a future star so far for Houston. A hive mind of about 30 NFL fans predicts he will keep it going against the Browns, picking the Texans to win Sunday.

All Deshaun Watson did in college was lead the Clemson Tigers to back-to-back national championship games against the mighty Alabama Crimson Tide, winning the second of the two matchups. Yet Watson struggled to attract NFL scouts’ attention in the way other, less accomplished quarterbacks did, so he’s doing quite a bit of proving people wrong as he has gone to work in recent week. The Browns, for their part, are still just looking for their first win of the year.

The swarm picks the Teans with high confidence and 93 percent collective brainpower behind the pick.

The 9.5-point line is big, and it’s enough to knock down the hive mind’s confidence. It’s now a low confidence pick with just 73 percent collective brainpower, though some of the dissent is still picking the Texans with high confidence.

More like this
Innovation
6 hours ago
A sports physicist reveals the hidden science behind this year’s World Cup soccer ball
By The Conversation and John Eric Goff
Innovation
November 30, 2022
Farts say more about your health than you think — now, scientists are listening
By Max G. Levy
Innovation
November 24, 2022
Human-free farms could solve a major food problem
By Molly Glick
Related Tags
Share: