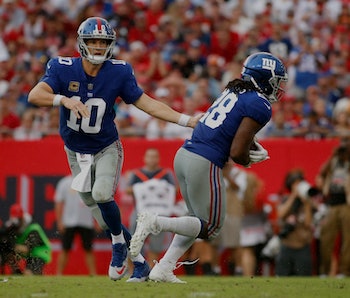 The Los Angeles Chargers and New York Giants are both 0-4. Historically, that’s enough to declare their seasons over. But at least one team is going to emerge Sunday with a first win, and a hive mind of about 30 NFL fans picks the Giants to win Sunday at home.

Neither the Chargers nor Giants are probably quite as bad as their 0-4 records indicate. After a putrid start for the New York offense, the Giants have lost their past two games by a combined five points, and the Chargers have also come up just short in multiple games. Assuming they don’t tie — and hey, it could absolutely happen! — at least one team will finally have their hard, previously futile work pay off with a victory.

The swarm likes the New York Giants to win here, though it’s not the most certain pick — the low confidence choice has a not great 81 percent brainpower behind it.

Adding in the 3.5-point spread makes the swarm less confident in New York’s chances, with the swarm’s collective brainpower dropping to 76 percent.