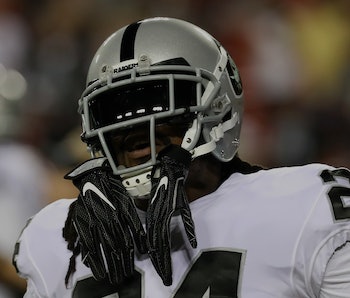 Both the Denver Broncos and Oakland Raiders picked up their first losses of the season last week, undercutting the previously ironclad argument that the AFC West was the best division in the NFL. One of these teams can get back on track this week, and a hive mind of more than 35 NFL fans think it’s going to be Denver, picking the Broncos to win Sunday.

The upset losses for both teams last week were fairly shocking, with Washington crushing the Raiders 34-17 and the Buffalo Bills beating Denver 26-16. It would be a hell of a statement for the Raiders to beat the Broncos Sunday, considering the game is in Denver, where the team is tied for the NFL’s best home record at 21-5 since the start of the 2015 season.

The swarm took some time to think this one through, with lots of divided opinion on the result, but the ultimate pick was Denver with low confidence. The collective brainpower of 79 percent is low but actually better than one might expect, given all that wavering at the outset.

The swarm seemed to consider picking Oakland for a moment there, but ultimately the hive mind moved relatively swiftly to take the Broncos to beat the spread, with 76 percent collective brainpower behind the low confidence pick. That’s a very uncertain pick, for what it’s worth.

More like this
Innovation
Jan. 19, 2023
A robot choreographer reveals why M3GAN — and all robots — should dance
By Molly Glick
Entertainment
14 hours ago
Robert Zemeckis Has Found His Latest Tech Tool With AI De-Aging — And That’s Good
By Dais Johnston
Gear
15 hours ago
Why Mercedes-Benz’s Self-Driving Milestone is a Big Deal for Autonomous Cars
By Jackson Chen
LEARN SOMETHING NEW EVERY DAY.
Related Tags
Share: