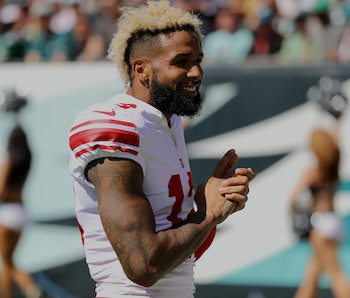 The winless New York Giants have looked bad so far this season, managing an NFC low 37 points through their first three games. They at least lost close last week, and they hope to avoid total disaster against a growing Tampa Bay Buccaneers team. A hive mind of more than 35 NFL fans aren’t feeling the Giants on Sunday, picking Tampa Bay to win at home.

Because of Hurricane Irma, the Buccaneers have still only played two games this season, and last week’s was a stinker, as they lost 34-17 to a Case Keenum-quarterbacked Minnesota Vikings team. At least the Buccaneers have shown signs that they can put together a competent offense, something the Giants — even with star wide receive Odell Beckham Jr. — have struggled mightily to do.

The swarm isn’t at all certain about this one. You can see that nobody has high confidence the Giants will win, but all three other positions are well-represented, with a low 72 percent of the swarm’s collective brainpower ultimately going with the Buccaneers, albeit with low confidence.

It’s a similar story when the spread is involved, though here nobody seems to want to pick the Buccaneers to cover with high confidence either. Given Tampa Bay just needs to win by more than a field goal, it’s perhaps understandable the same swarm that picked them to win outright would also opt for them to cover.