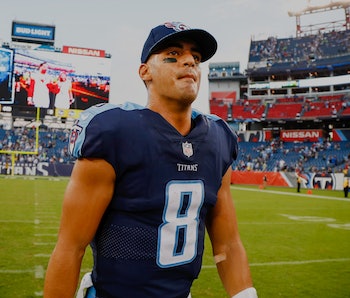 The Tennessee Titans are 2-1 with a chance to make a serious play in the AFC South. They can take a nice little step toward a division title with a victory over the rival Houston Texans Sunday, and a hive mind of more than 35 NFL fans like the Titans to do just that and get the win.

Third-year quarterback Marcus Mariota and the Titans have looked solid so far this season, with their 37-16 victory over a Jacksonville Jaguars team that turned around and beat the Baltimore Ravens 44-7 looking very, very good, transitively speaking. For their part, the Texans are looking to get to .500 and keep the AFC South very much up for grabs.

The swarm is ultimately behind the Titans here, with 76 percent brainpower for the low confidence pick, but look at where all the magnets are. Opinions are across the board here, with plenty of dissent in favor of the Texans winning.

There’s even less certainty around who will win against the spread, with an extremely low 58 percent of the hive mind’s collective brainpower picking Tennessee here. Tread very lightly.