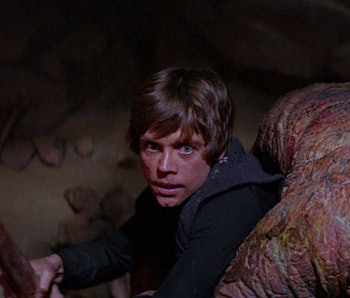 When Luke Skywalker sent all of his friends to Jabba the Hutt’s Palace in Return of the Jedi he totally had a plan. Every detail of Luke’s long-con must have been planned-out meticulously, including Leia briefly being turned into a sex slave, and Chewie being imprisoned with Han. This all makes sense, right? Well, from almost every point of view, the answer is “not really.” So what does Mark Hamill think? What was Luke’s actual plan for storming Jabba’s Palace and why didn’t he just go in there swinging his lightsaber at those pig-guards right away?

“I’m kind of intrigued now, because people use logic and they’ve seen these movies so often that, like you say, they’ve discovered a flaw in the logic or the feasibility of whatever Luke’s plan was,” Mark Hamill told Star Wars.com on Monday. “We never expected people to see it 30 times and write dissertations and theses and discuss it in that kind of detail … So, they [Star Wars fans] know it better than I do.”

Hamill reiterates something Star Wars fans have known probably since the 1997 special editions of the classic trilogy: the people who know the most about the plots of the Star Wars movies probably aren’t the people who made those movies. In fact, what he says here echoes a nearly unique phenomenon throughout various sci-fi and fantasy fandoms: hardcore fans of Star Wars value basic plotting above nearly anything else. We obsessed over how much Rogue One matched-up with A New Hope or how much The Phantom Menace didn’t. But, these kinds of nerdy deep-dives can also be paradoxically shallow. If Luke’s plan in Return of the Jedi had just been to walk into Jabba’s Palace and lightsaber the shit of all those pig-guards to begin with, what kind of movie would we have been watching? Even if it is nonsensical, the drawn-out opening of Return of the Jedi makes it what it is, which is arguably all that matters.

There’s another dark phantom lurking in Hamill’s answer to this question. And that’s the idea that maybe Star Wars movies of yesteryear weren’t designed to withstand the amount of scrutiny they’re under these days. Sure, retroactively, everything can have an answer, and the Lucasfilm Story Group can bend over backward to create all sorts of retcons, but that might not be the type of artform Star Wars was ever meant to be.

To put it another way, nearly nothing about the origins of the Star Wars galaxy makes any sense whatsoever. Humans are the most dominant species in the galaxy, and yet we’re not really sure where they “originate” from in the history of Star Wars. And, even if there is an answer to this question, it only proves the problem with asking too many questions about Star Wars. Any “logical” answer to a question about Star Wars, produces a sort of logical — but implausible — answer. The entire canon of Star Wars is like an aesthetic magic trick, and we the fans are constantly asking the magician to show us how the trick was done. Naturally, when we find out, we’re disappointed. And then, somehow, the magician erases our memory, and we start asking the same kinds of questions all over again. How come those AT-ATS have such sensitive legs anyway?

Fittingly, the Return of the Jedi plot hole question on Star Wars.com was actually asked by Mark Hamill’s son Nathan. Proving, once again, that the most enduring aspect of the Star Wars universe might not have anything to do with plot holes, but instead, a giant meditation on the relationships between parents and their children.

Star Wars: Episode VIII – The Last Jedi — a movie which won’t have any plot holes at all — will hit theaters on December 15.

If you liked this article, check out this video of three reasons why Luke will turn to the Dark side in The Last Jedi.