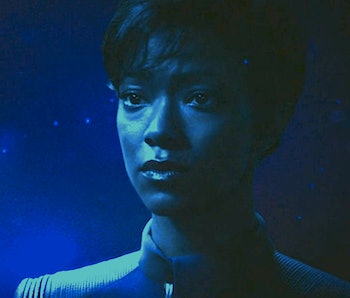 Star Trek: Discovery is already unlike any of its five predecessors. The first Star Trek show in 12 years isn’t about a captain or even a particular starship and its crew. Instead, it’s about one person’s journey toward redemption. The show has a chance to meld together the best of five decades’ worth of Star Trek lore and the best of TV’s recent shift toward more serialized storytelling, and it all turns on its hero, Commander Michael Burnham.

Spoilers ahead for the first two episodes of Star Trek: Discovery.

As seen in Discovery’s first 90 minutes, Burnham is far from perfect. The same goes for the show, which can be clunky in places as it works out just what televised Star Trek means in 2017. But it’s the show’s commitment to exploring its main character’s imperfections—and how, given time, she can change them—that is the most encouraging sign that the show itself can fix its own flaws in time, creating a Star Trek whose virtues build on yet stand apart from its five predecessors.

Played by The Walking Dead veteran Sonequa Martin-Green, Burnham goes on more of a character journey in the show’s opening 90 minutes than most Star Trek protagonists manage across several seasons. The story charts her fall from exemplary Starfleet officer on the verge of receiving her own command to a convicted mutineer stripped of her rank who must now carry the burden of starting a war with the Klingons.

What’s remarkable is that all that happens without the show’s titular starship even showing up – the U.S.S. Discovery and most of the regular cast aren’t glimpsed until the closing trailer advertising the rest of the season. The show prioritizes its characters – and really, just this one character – over the adventures of the ship as a whole or the larger universe of Star Trek in a way that no previous show has done.

Yet Discovery isn’t just a grim character study. It exults in the wonders of the cosmos in a way only Star Trek can. With much of the action set in the accretion disk around a young binary star system, the episodes’ visuals are eye-popping in a way we have never seen in on televised Trek before. The special effects possible on a TV budget have never been closer to realizing the wonders of the cosmos or imagining how the humans of Starfleet might fit into it.

And, as ever, Star Trek remains a franchise driven by ideas, chief among them the question of what it means to come in peace against fundamentally hostile foes. Can commitments to peace and diplomacy become little more than banal platitudes when they go untested for too long? Discovery depicts the beginning of a war the Federation appears ill-equipped to fight, in philosophy and outlook if nothing else.

All of which is to say that, from the opening monologue delivered in slow, precise Klingon, it’s clear that this is a full-throated embrace of Star Trek lore, even if diehard fans will have room to quibble over how cleanly the show fits alongside the original series. Just as The Next Generation updated Star Trek 20 years after the original and just as Deep Space Nine embraced television’s push toward less episodic storytelling, then just in its infancy, Discovery looks to bring the best of modern, more character-driven serialization in service of something that’s resolutely Star Trek.

Not that “The Vulcan Hello” and “The Battle at the Binary Stars” are necessarily great television – Star Trek has long asked viewers to judge its series premieres more on potential than on immediate results. But the two episodes serve as a solid enough starting point for Discovery, even if much of what the show will be on a weekly basis remains uncertain. These episodes are very much prologue rather than first chapter, focusing on Burnham’s relationship with Michelle Yeoh’s Captain Philippa Georgiou aboard the U.S.S. Shenzhou, neither of which survives to the closing credits. It’s the equivalent of, say, Deep Space Nine’s premiere being a two-hour version of the opening scene set during the Battle of Wolf 359, with Benjamin Sisko not even arriving at the space station until episode three.

Only a few elements of Discovery’s first two episodes figure to carry over to next week, chief among them Burnham, Doug Jones’s alien science officer Saru, and James Frain’s interpretation of Ambassador Sarak, Spock’s father and Burnham’s adoptive guardian. Saru is a quintessentially Star Trek concept, his species fulfilling the evolutionary role of prey rather than predator, which informs his fundamentally different worldview than humans and just about any other species Discovery might encounter. Throw in Saru’s inhuman proportions and his spiky chemistry with Burnham, which recalls a more dickish version of Spock and Bones’s old sparring, and he already figures to be a real asset.

The decision to crowbar Burnham into Spock’s backstory as a previously unmentioned foster sister is never not going to be weird, but at least Frain’s Sarek suggests some good value out of it. As coldly logical as the Vulcan ambassador can be with his human ward, Frain betrays signs of genuine compassion and caring toward Burnham, hinting at a relationship ripe for further exploration, whether just in the present day or through additional flashbacks.

But ultimately all of Discovery must flow through Burnham, which puts a serious onus on Martin-Green. She spends most of these first two hours sketching out the different elements of her performance. We see the at times harsh logic of her Vulcan upbringing alongside her human excitement about exploring space. She shows much of the trauma and rage that informs her actions against the Klingons, yet she doesn’t make such a meal of this material that it becomes hard to believe she could be a functioning Starfleet officer.

Her various interactions with Georgiou and Saru both suggest she can build compelling, varied dynamics with the other key characters, even if only one of those two figures to remain an ongoing presence on the show. There’s plenty that remains to be seen with Burnham, especially in how she relates to the characters waiting for her aboard the Discovery, but Martin-Green shows all the pieces are there, waiting to be put together.

Looking more broadly at this particular Star Trek’s visions of the 23rd century, the show reaffirms humans, Vulcans, and Klingons as the key races of Star Trek, and there figures to be plenty more exploration of the interplay between these very different peoples. While the closing trailer teases some sort of greater, mythos-driven mystery with Burnham’s “What the hell is going on on this ship?”, for now most of the serialization appears rooted in her journey.

And here’s the other basic truth about every Star Trek show: This franchise has never been a fast starter. The original Star Trek needed three pilots to get things right. The Next Generation famously needed the better part of two seasons to figure itself out, with much of its early run outright bad. “Emissary” is easily the best of the Star Trek premieres, but it only offered a glimmer of what Deep Space Nine would become, and for all their flaws both Voyager and Enterprise improved massively from their pilots, even if it took seasons to do so.

“The Vulcan Hello” and “The Battle of the Binary Stars” aren’t classics, but that’s never really been Star Trek’s modus operandi. At best, they serve as promises of what Discovery can become, even if it withholds a lot of the information one would hope to have to judge that properly. There’s something here that’s worth nurturing, even if it’s far from fully formed. Now let’s hurry up and get to the damn ship.

Star Trek: Discovery’s third episode — “Context is For Kings” — will air on CBS All-Access on October 1 at 9pm EST.