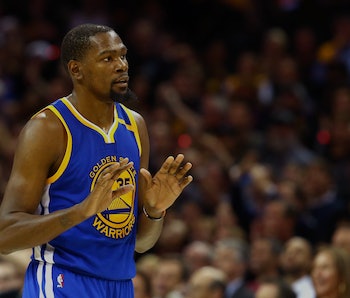 Just because it’s possible doesn’t mean it should be done, says NBA star Kevin Durant. The 28-year-old weighed in on a controversial question on Tuesday, saying he wouldn’t want robot referees to replace “human judgment” on the basketball court. How much to let tech decide sports has come up a lot lately, in no small part because Durant’s Warriors are make the mouths froth of would-be “disrupters” who work in nearby Silicon Valley

For Durant, what the human refs don’t call is more important than what they do. As he explained during an appearance this week at TechCrunch Disrupt, he worries AI officials would call every little foul that players commit, showing none of the discretion their human counterparts do currently.

“I’d rather keep it at the human judgment, I feel as though they are doing a great job anyway, “Durant said. “If you get the AI refs, they’ll call every touch a foul and I get away with a lot. I’m sure they’ll catch me a little bit more than the human refs, so I’ll stick to what we’ve got now.”

Durant’s a decorated player, winning the league title, the MVP, the Finals MVP, the All-Star MVP, four scoring titles, and Rookie of the Year, and his opinion is shared by many in the NBA and athletes in other sports, says an academic on the matter.

“A lot of athletes say they like the officials being a part of the game,” Cornell University researcher Karen Levy says. “(AI) has to accord with what people’s expectations are.”

Artificial intelligence, powered by facial recognition and rapid machine learning, has the potential to make decisions and enforce rules with crazy accuracy. Blown calls, missed fouls, and controversial mistakes made by human referees could largely be avoided.

But doing so could well mean the loss of the generally accepted practice of letting the players decide the game in its closing moments, with the refs intruding with a call only when necessary. It also could rid the NBA and other sports of the longstanding tradition for both players and fans alike of questioning the referees’ calls, according to Levy.

“There’s this desire of drama, you want rules to be broken,” she said. “If we called absolutely everything, the game would be unwatchable.”

Levy, a professor of law and information science at Cornell, researches the effect of technology on rule enforcement — both in the legal system and in professional sports. She recently co-authored a paper looking at how various sports would change with increased automated regulation. She found that people in sports, both players and fans, aren’t looking for every minor offense and foul to be called.

Although Durant’s comments during what’s been a weird summer for him were slightly tongue-in-cheek, Levy said that no one in sports is naive enough to think every penalty should be called, which would result in games that are “more mechanical and pedantic.”

AI’s lack of human emotion could also be a disadvantage with calls that require some judgment. There’s “no way” AI could pick up on a penalty like excessive celebration, Levy said.

Still, the issue doesn’t lie in the question of if the technology will someday exist. Using video for review and challenges in real time has become a regular part of most pro sports, so it wouldn’t be a reach to apply these cameras and algorithms to other parts of the game, Levy said.

It’s a question instead of whether people want the technology. There are decisions currently made in sports that could be made more accurately with AI. Using physical chains in football to measure out the 10 yards needed for a first down is wholly inaccurate, but it’s stuck around because it’s “tradition,” Levy said.

Fellow NBA star Steph Curry, Durant’s Golden State Warriors teammate, has also commented on the possibility of AI in basketball. He told last year’s TechCrunch Disrupt that he would love having robot referees, though it wouldn’t stop him complaining about bad calls.

“I would have to throw my mouthpiece at those new inventions,” Curry said, laughing.

The ruling organization for international soccer approved goal-line technology in 2012 after a series of controversial calls that caused massive uproar. The NFL equips players’ uniforms with RFID tracking chips and records numerous stats on running speed, play length and throwing distance. The NBA is utilizing computer vision technology starting in the upcoming 2017-18 season to record its own data.

Will artificial intelligence colonize space before humanity? Check out this video to find out more.

More like this
Innovation
7.28.2022 11:15 AM
A new robotic twist on the “Turing test” fools human subjects
By Sarah Wells
Science
7.23.2022 11:00 AM
Astronomers have an ambitious plan to discover the first light in the universe
By Kiona Smith
Innovation
7.29.2022 2:00 PM
Amazon's new invention could let you “speak” to the dead — but should it?
By Sofia Quaglia
Related Tags
Share: