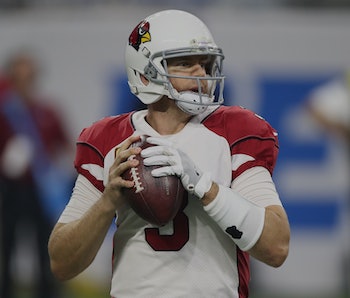 The Dallas Cowboys hit a major roadblock last week in a blowout loss to the Denver Broncos. The Arizona Cardinals are trying to stay afloat after an injury to star running back David Johnson. Who will come out on top Sunday? A hive mind of more than 30 NFL fans likes the Cowboys to win.

The Cowboys have been on both sides of convincing wins this season, swapping a 19-3 victory over the Giants for that rout at the hands of the Broncos. The Cardinals only squeaked by the lowly Colts last week, which takes at least a little bit of the pressure off as they retool their team on the fly in Johnson’s multi-week absence.

The swarm isn’t feeling great about this one, with just 76 percent of its collective brainpower behind the eventual low confidence pick in the Cowboys. You can see there are magnets all over for this one, suggesting a relatively big mix of opinion on how this one is going to play out.

Similarly, the hive mind isn’t exactly jumping at the chance to bet on either team here, settling on Dallas winning by more than a field goal on the road. Here the collective brainpower is at just 72 percent, so this is about as weak a pick as you get that can still even be considered a pick at all.

More like this
Science
7.3.2022 1:30 PM
NASA move could help the International Space Station stay in orbit without Russia
By Nancy Atkinson and Universe Today
Science
17 hours ago
A monster sunspot just doubled in size — and it’s pointing right at Earth
By Andy Tomaswick and Universe Today
Science
3 hours ago
25 years ago, NASA landed its first rover on Mars — and catalyzed the search for life
By Doris Elín Urrutia
Related Tags
Share: