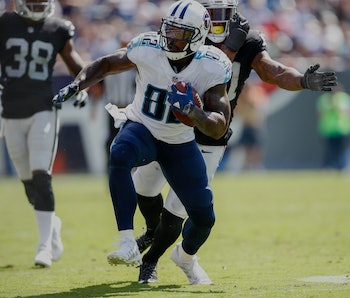 The Jacksonville Jaguars were the only AFC South team to win last week, beating their division rival Houston Texans. They have a chance to repeat the trick this week against the Tennessee Titans and continue to sit alone atop the South. But a swarm of more than 40 NFL fans isn’t quite sure it’s ready to believe in Jacksonville, barely picking the Titans to win in a squeaker on Sunday.

It probably shouldn’t be considered noteworthy that a team could reach 2-0, but the Jacksonville Jaguars haven’t made the playoffs for nine straight seasons and haven’t even averaged four wins a year since 2011. Even small signs of forward progress count for a lot, and they got that with a 29-7 upset of the Texans in Houston. While that game was played in the aftermath of Hurricane Harvey, it’s now the Jaguars’ turn to try to offer some distraction to those in Jacksonville affected by Hurricane Irma.

The swarm really doesn’t know what of make of this one. The magnets suggest an even split between picking Tennessee and Jacksonville, with a very low 70 percent collective brainpower behind the eventual pick. This early in the season, the hive mind is picking as much based on past reputation as anything else, and Jacksonville’s track record is pretty bad.

This is how ludicrously close the swarm considers this game, picking Tennessee to win straight-up but the Jaguars to cover a two-point spread. The hive mind is effectively picking a one-point Titans win here, which is probably best taken not as a locked-in prediction but as an indicator of just how close and uncertain this game figures to be. Approach this one with caution, basically.