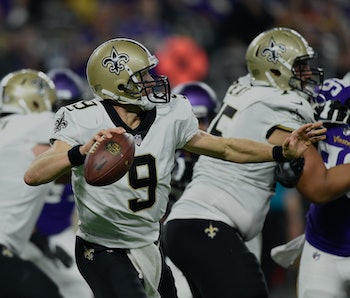 Tom Brady and Drew Brees could both rank among the 10 best quarterbacks of all time — Brady is in the conversation for best signal-caller ever at this point — but their 2017 seasons got off to seriously bumpy starts with tough opening losses. Which veteran great will rebound in New Orleans? A hive mind of more than 40 NFL fans are picking the defending Super Bowl champions.

It’s been a while since the Saints were serious contenders, so it’s not so surprising they lost 29-19 to the Vikings, even if it was a fairly demoralizing loss. But the real shocker of week one had to be the Patriots falling at home to Kansas City 42-27, as the Chiefs carved up New England’s defense and at times made Tom Brady look every bit the 40-year-old that he is. If the Patriots lose again, New England might be ready to hit the panic button, early as it is.

Here’s the good news for Patriots fans: The swarm really likes New England to win, putting 92 percent of its collective brainpower behind the high confidence pick. Here’s the bad news: The swarm was almost that confident about them beating the Chiefs last Thursday. For now, the hive mind is assuming that game was an outlier.

Yeah, this is just disrespectful to Brees and the Saints, who are picked to lose by more than a touchdown at home. Even against the Patriots, that has the makings of a nightmare.