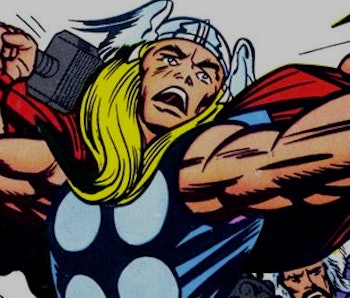 With Thor engaging in gladiatorial shenanigans in Ragnarok, you would be forgiven for assuming that he’s sporting a more disciplined hairdo this time around purely because the plot demanded it. However, the actual reason is much more practical.

On Tuesday, Entertainment Tonight posted a video of an on-set interview with Thor actor Chris Hemsworth, in which he explained why Thor really has a new look in the film. “There’s not a huge explanation, really. It’s kind of me going, ‘I don’t wanna wear the wig every day. It takes two hours to put on,’” Hemsworth said. “Kind of just run with the creative license there. Give him a different look, you know?”

And here he is with long hair:

In Ragnarok, Thor gets his new haircut after being captured by the Grandmaster (played by Jeff Goldblum), presumably as a result of being a prisoner — and being forced to partake in gladiator-style combat.

When it was first revealed that Thor wouldn’t have his long locks in the film back in March, the news didn’t go over well with the fans: “Whoever at Marvel is responsible, hear this: THOR NEEDS LONG HAIR. It’s kind of the whole point. He needs to look ridiculous AND cool,” commented a fan on Twitter.

While Thor’s new haircut may have been more a product of outside factors than what the film dictated, it still fits naturally into the story and is a great way of signaling that Ragnarok could be a very different beast from the previous two Thor films.

Thor: Ragnarok will premiere in the US on November 3.