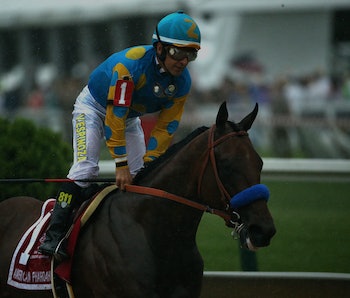 Tomorrow is a big day for #Sport. Not only does the Women's World Cup kick off, American Pharaoh will ride for the first Triple Crown in 37 years. He's got a few things going for him, which is nice. They are:

Right now, American Pharaoh sits at 5/7 odds, so he's a heavy favorite. It's not a wide-open field: the next best odds are Frosted at 6/1. A trusted source also says Pharaoh is gonna steamroll all those other clowns.

More like this
Gear
Feb. 1, 2023
Samsung's Galaxy S23 Ultra is Gunning for the Smartphone Camera Crown
By James Pero
Culture
Feb. 5, 2023
Genius things you didn't know you were missing in your home — & they're all super cheap
By Veronika Kero
Entertainment
11 hours ago
Rick and Morty Season 7 Needs to Steal the Best Doctor Who Trick
By Corey Plante
LEARN SOMETHING NEW EVERY DAY.
Share: