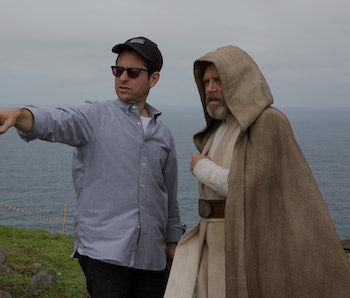 The circle is now complete: J.J. Abrams will finish the Star Wars trilogy he began as the writer and director of Star Wars: Episode IX.

On Tuesday, Lucasfilm officially announced Abrams as the director of the last installment of the current Star Wars trilogy. Following the exit of Colin Trevorrow, “Abrams will co-write the film with Chris Terrio.” In the official statement, Lucasfilm President Kathleen Kennedy said this: “With The Force Awakens, J.J. delivered everything we could have possibly hoped for, and I am so excited that he is coming back to close out this trilogy.”

For fans worried about wonky continuity between the beginning of the new trilogy and the end, the news that Abrams is back is comforting. It’s also the first time since the prequels that the same writer-director will helm the first and last installments of a three-part story. Right now, it’s a good bet that any leftover plot threads from The Force Awakens that Abrams was unable to finish, will get tied up in Episode IX.

Abrams’s co-writer on Episode IX might come as a bit of a surprise to fans. Chris Terrio is probably most famous for writing the screenplay for Batman V. Superman, but also wrote the meta-historical drama Argo with Ben Affleck. What he will bring to the Star Wars table remains unclear.

For now the title of Episode IX has not been announced. The film is still scheduled for release on May 24, 2019.