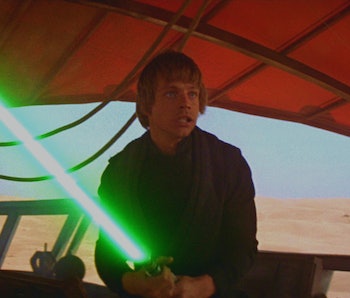 On top of mysteries like the true identity of Supreme Leader Snoke, a big question on the minds of many Star Wars fans has been “where exactly is Luke’s green lightsaber?” Unfortunately, new photos for The Last Jedi don’t provide any answers to this question, but that’s telling in its own right.

On Tuesday, ComicBookMovie revealed a bunch of character standees for the The Last Jedi, some of which have already been seen on trading cards. And notably, Luke’s green lightsaber is once again absent from the film’s promotional materials. While Rey and Kylo Ren are both brandishing their lightsabers in their images (except in the photo of Kylo Ren with his helmet on), Luke is standing with his arms folded.

Luke’s green lightsaber was such a dramatic way of signaling that he had become a fully fledged Jedi Knight in Return of the Jedi that it not having a presence in marketing for the film is absolutely intentional, and means it will probably play an interesting role in The Last Jedi’s story. Though Luke could have always lost it during a confrontation with Kylo Ren and the First Order, given his ominous line in the film’s teaser trailer (“The Jedi must end”), it seems likely that him not having, or perhaps not using, his green lightsaber is a choice. Perhaps at some point in the The Last Jedi Luke figures out what his purpose is now, and takes up his lightsaber again to defend the future he hopes to help create?

In any case, with the way the film’s been handling spoilers in its marketing, we likely won’t know much more about this until the film comes out in December.