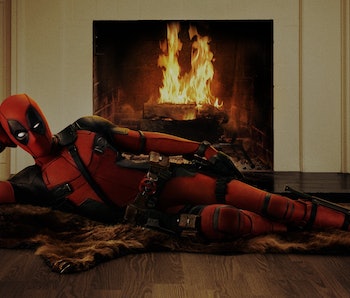 Regardless of which side of the political spectrum you’re on, we can all agree that these are trying times for the United States. Luckily, a recent court case helped show just how great America can be. The First Amendment legally protects the right for you to be served an alcoholic beverage while Deadpool masturbates on a big screen in front of you.

In the 2016 film Deadpool, the Merc With a Mouth cranks his chimichanga with the aid of a stuffed-animal unicorn. This bit of self-love got a movie theater in Utah in trouble with the law. Brewvies, which as you might guess based on the name, offers beers during film screenings. This got folks at the state’s Department of Alcoholic Beverage Control upset as in April of that year they sent Brewvies a letter accusing the theater of violating a law preventing DABC-licensed venues from showing a film that depicts obscene sexual acts, simulated or otherwise, according to Vice.

Brewvies got “caught” in what sounds like the dumbest sting operation of all time. Two DABC agents went to the theater undercover and ordered Bud Light beers while watching the film. Then the agents narced on Brewvies by filing a very prudish report.

The DABC slapped Brewvies with a 10-day suspension of an alcoholic beverage license and/or a fine of $1,000 to $25,000. Brewvies fought back, arguing that Deadpool wasn’t obscene. On August 31, U.S. District Judge David Nuffer agreed, writing that the law the DABC was using to go after the theater was “overinclusive because it captures mainstream content.”

It means that you can pound brews while watching Deadpool pound himself.

More broadly, Deadpool helped, in its own unique way, to expand First Amendment protections in the United States. The country has always had a rough go of it when it comes to defining obscenity, and Deadpool’s hard-R success shows that social mores are changing. Indeed, back in 2011, Brewvies got in trouble for showing The Hangover Part II, and in that instance, they paid a $1,500 fine. Then, in 2015, the DABC told the theater they could not show the films Magic Mike and Ted 2. The Merc With a Mouth inspired them to fight back, and the court victory might make it so raunchier mainstream films can be streamed in the future without undue scrutiny.

If Ryan Reynold’s wisecracking superhero jerks it in Deadpool 2, set to come out in 2018, you can watch with a drink in hand at Brewvies.