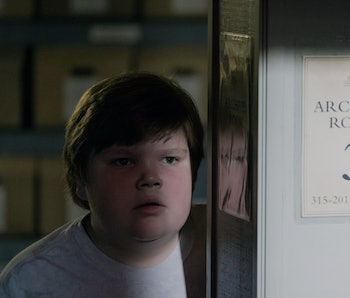 The reviews of It, the remake of the 1990 miniseries inspired by the 1986 Stephen King novel, have been generally positive with the expected qualifications that the clown at its center has been simplified to more of a monster — athletic, menacing, verbal — and less of what made it so creepy to begin with: mysterious, intangible, invisible, omnipotent.

The 2017 remake of the movie jumps forward a generation, so the kids of the film live in the late 1980s, not the late 1950s. The director, Andy Muschietti (best-known for directing the witch-mom story Mama), does an admirable job of not bogging down the movie with ‘80s symbols — despite Hollywood’s reverence for nostalgia — but he does weave in one memorable reference to the decade: The five-member boy band sensation New Kids on the Block.

The NKOTB show up at three memorable times, because they are a secret pleasure of Jeremy Ray Taylor’s Ben Hanscom, the sensitive, smart, new kid in town.

Early in the movie, we find Ben, preciously struggling to carry what looks like a Game of Thrones-inspired diorama down the steps on the last day of school (it’s actually a building he visits in the town later in the movie). He runs into Sophia Lillis’s Beverly Marsh, who takes pity on him and signs his yearbook after he says they are in Social Studies class together.

She notices he’s listening to music on his Walkman — “Please Don’t Go Girl” — by the New Kids, and sweetly hints how it’s not exactly the coolest choice for a boy in junior high. She keeps his secret though.

Later, Beverly tells Ben he’s got the “Right Stuff” after noticing a New Kids on the Block poster on his bedroom door, while the other members of the Loser’s Club miss it. No one else in the Loser’s Club knows about Ben’s NKOTB fandom.

While Beverly and Bill exchange a kiss later in the movie, and their flowering relationship gives Ben his first dose of adolescent pain, “Ben from sosh” and Beverly at least posses that shared secret, a moment of authentic sweetness in a movie, that at points, feels about as real a theme park.

More like this
Entertainment
8.17.2022 1:30 PM
The one incredible Marvel movie you need to watch before She-Hulk
By Dais Johnston
Entertainment
8.6.2022 1:00 PM
Static Shock live-action movie is "still in development," Denys Cowan says
By Eric Francisco
Gaming
8.17.2022 4:00 PM
We Are OFK can't deliver on its promise of musical spectacle
By Willa Rowe
Share: