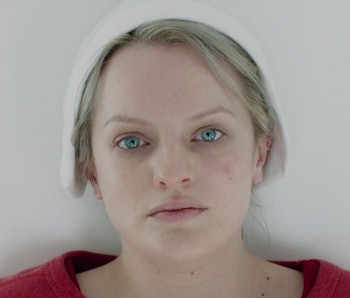 The cliffhanger for Season 1 of Hulu’s The Handmaid’s Tale ended with a tense border-crossing and an arrest that left a door wide open to explore more of Margaret Atwood’s terrifying world. Season 2 is on the way, and Offred actor Elisabeth Moss recently said she was totally surprised by the direction the show is taking.

“I have been saying about the opening scene of Season 2 that whatever you think it’s going to be, just throw it out; because it’s gone in a completely different way… than I ever would have expected,” said Elisabeth Moss on Thursday night on Watch What Happens Live, adding that the season has not begun shooting.

The male-oriented regime of Atwood’s The Handmaid’s Tale, Gilead, can only grow more convoluted in Season 2; the show ran out of book content at the end of Season 1 when Offred got carted off by the secret police, the Eye. And while Offred’s fate is pretty much sealed in Atwood’s novel, Hulu’s show left things a little more up in the air. What will become of Offred?

Well, if Moss is to be believed, even the most devout fans will have a hard time guessing.

Here’s everything we know about The Handmaid’s Tale Season 2.

The Handmaid’s Tale Season 2 is expected to premiere on Hulu in 2018.