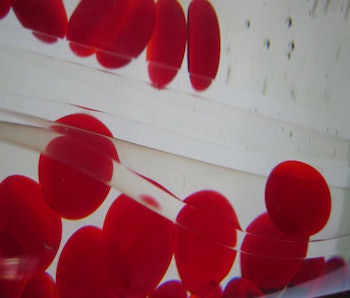 Most of us, enslaved by power outlets, can’t leave home without a charger or an extra battery pack in tow. The only way to break this cycle of dependency is to figure out how to generate power ourselves, but barring inventions like dorky “smart” power-generating shoes, we haven’t made much progress in that field.

A team of Chinese scientists, however, may have just changed that by figuring out how to draw electricity from our own bloodstreams.

In a study published in Angewandte Chemie International Edition on Friday, the researchers report that they’ve created a tiny fiber, thinner than a hair, that can generate power from the movement of rushing blood. The concept behind it is obvious: Hydroelectric power plants, used for centuries, have capitalized on our ability to turn the potential energy of a stream, waterfall, or ocean into electricity, so why not do the same with the rivers of blood in our bodies?

One obvious issue, of course, is that the motors that do all the energy converting in hydroelectric power plants are huge and difficult to scale down to the human-friendly nano-scale. In 2011, Swiss researchers tried, creating nano-scale motors that floated around in the blood stream, but those also had the potential to create dangerous blood clots.

The Chinese team, from the Laboratory of Advanced Materials at Fudan University, get around this obstacle by using a long, delicate fiber instead of a relatively clunky nano-motor. Their “fluidic nanogenerator fiber,” or FFNG for short, is made out of an incredibly thin — under a millimeter thick — nanotube of carbon, which is flexible and stretchable. When this fiber is immersed in a tube surrounded by flowing blood (or saline solution), it can generate electrical power with a conversion efficiency of 23.3 percent.

Its power-generating ability comes from the electroactive carbon nanotubes, which are wrapped around a fiber core, like thread around a spool. The fiber core is ultimately what electrons travel along as the carbon nanotubes around it lead to the generation of an electrical gradient.

“The electricity was derived from the relative movement between the FFNG and the solution,” the researchers said in a statement.

The team’s first tests with the FFNG, on frog nerves, were “successful,” and they envision their technology being used to harvest electrical energy from the blood for medical devices.

It isn’t clear yet, however, just how much energy can be pulled from the human body. If upcoming experiments go well, it’s entirely possible that enough electricity could someday be generated to power, say, your future iPhone 25, bringing the tyrannical reign of the phone charger to an end.