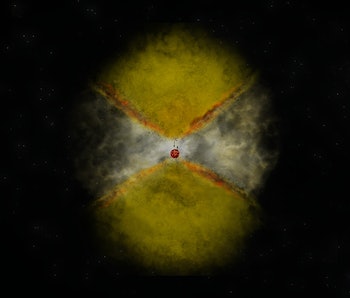 Not all stellar explosions involve a violent, bombastic death for a star. While supernovae are the well-known variety of stellar bombs with which most are familiar, there actually exists a more moderate, quieter version that’s un-super. Novae are nuclear explosions which occur on the surface of stars — mysterious flares which create a brightened glimmer in the galaxy. But while scientists are pretty clear on what a supernova is — the explosive conclusion to the fulfilled life of a star — the process behind a nova is less clear, especially as to what causes some to flare brighter and more powerful than others.

A team of American astronomers, however, think they might have found the answer. In a new Nature Astronomy study of the surface of white dwarf stars using two sophisticated telescopes, the researchers proved a theory of how and why super-luminous novae occur.

The culprit, it turns out, are shockwaves that augment the power of these nuclear explosions beyond what any one has witnessed before. “Astronomers have long thought the energy from novae was dominated by the white dwarf, controlling how much light and energy are emitted,” said Laura Chomiuk, Michigan State University astronomer and study co-author, in a news release. “What we discovered, however, was a completely different source of energy – shockwaves that can dominate the entire explosion. The bigger the shock, the brighter the nova.”

When a nova begins, it first releases a cool wave of gas, followed quickly by a very fast, hot wave of gas. When those two phases collide, they produce a shockwave that leads to a more powerful, more jarring burst of heat and light.

“We believe it’s the speed of the second wave that influences the explosion,” said Chomiuk.

This was a theory Brian Metzger, an astronomer at Columbia University and a co-author of this latest study, first hypothesized. With the evidence now backing this idea, astronomers can move forward with a better understanding of how big stellar explosions operate, and understand how the processes behind more powerful events like supernovae occur.

“Novae are little laboratories in our galactic backyard that we can use to study some of the most luminous explosions in the universe,” Chomiuk said. “As future novae happen, we’ll be able to observe them to better understand how shocks light up and fuel explosions. We really want to find out how common and energetic shocks are.”