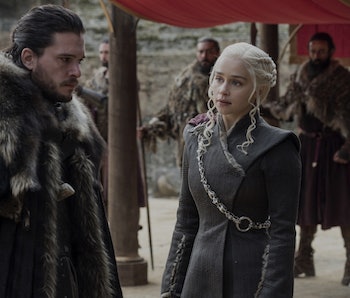 Game of Thrones famously has an absurd number of characters (although there are fewer now than there were just a few seasons ago). As the main power players fight over the Iron Throne, that massive cast is fighting for something else: screen time. Prior to Season 7, Tyrion Lannister had received the most screen time out of any character on the show, but he’s finally been usurped by Jon Snow. It’s so, so close, though.

IMDb user ninewheels0 put together a list of all the characters’ total screen time across all seven seasons, rounded to the nearest quarter-minute. It’s not an exact figure, as they explain: “Obviously, all numbers are estimates; your measurements may vary. Mine were taken by watching through scene-by-scene at normal speed with an iPhone stop-watch.”

Still, this isn’t the first time ninewheels0 has done this, so the new figures should at least be consistent with their findings through Season 6. Those numbers had Tryion in the No. 1 slot, with Jon coming in second. Season 7 swapped them, though not by much.

With Season 7, Littlefinger is now the deceased character with the most screen time, as he was just one minute short of a full two hours of screen time before he died, which was good enough for 11th place. Ned Stark is still, shockingly, in 13th place, which goes to show how he really was the main character during the one season he was alive. The Hodor and Tower of Joy flashback scenes counted towards his total of 100 minutes of screen time, but they only amount to a little more than seven minutes.

The Night King, in case you were wondering, comes in 109th place with just 8 minutes of screen time. Not a lot for the biggest bad in all of Westeros; though, to be fair, he doesn’t ever talk, and those scenes add up.

Here are the top 10, according to ninewheels0, but you can check out the full list of 199 characters on IMDb.