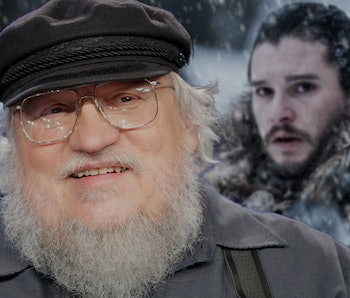 Fans are divided about Season 7 of Game of Thrones. Some love the show’s sudden accelerated pace and emphasis on spectacle; some bemoan the plot holes and wacky timelines. But A Song of Ice and Fire author George R. R. Martin’s opinion is the most damning of all — he isn’t even watching it.

On Wednesday, Martin told Metro that he just doesn’t have time to watch the adaptation of his books because he’s writing and touring.

This is a curious statement, since he’s been writing and touring during previous seasons, and he’s definitely watched them. In past years on his blog, he’s weighed in on controversies that arise from the show, like Sansa’s rape in Season 5 and the audience response. Up until Season 5, he also wrote one episode per season, which kind of required watching the show.

Plus, Season 7 is just seven episodes long. Even if you’re on the road a lot, it’s not hard to find the time for one episode of television before bed for seven weeks. “Touring too much” is a weak-tea excuse. It’s perhaps telling of Martin’s feelings toward the show beating him to the punch in ending the story — and the way it’s getting there.

For what it’s worth, Martin says that things will be different in his final books (if they ever come out).

“The book series and TV adaptation go their separate ways,” Martin explained to Metro. “On the screen characters are killed right and left. About twenty of them have died already, which are quite alive to me and will appear in a new book.”

Update, 11:30 p.m. Eastern: George R. R. Martin has now announced that he is, in fact, still watching the show. A translation error during an interview may have caused the mix-up.

The Game of Thrones Season 7 finale airs on Sunday, August 27 on HBO.