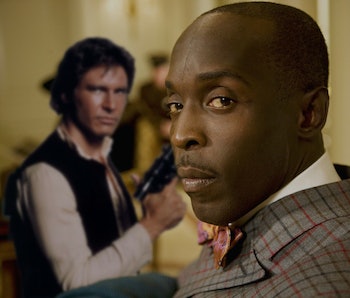 Since taking directing duties from Phil Lord and Chris Miller in June, Ron Howard’s reshoots on the untitled Han Solo movie have seemed mostly problem-free — until now. Due to scheduling conflicts, Michael K. Williams will no longer be in the film.

In an interview with Deadline published on Tuesday, Williams revealed that he had been cut from the movie.

When Ron Howard got hired to finish out the film, there were some re-shoot issues that needed to be done in regards to my character, in order for it to match the new direction which the producers wanted Ron to carry the film in. And that would have required me on a plane a month ago to London, to Pinewood, to do re-shoots. But I’m here, on location in Africa. It’s scheduling. I’m not going to be back on the market until the end of November after Hap and Leonard, and for them to wait that long for me, that would have pushed back the release date, which I believe is in May 2018. They wanted me now; I couldn’t go. So they had to clip clip clip.

Williams was slated to appear as a “half-human, half-animal” in the film, a role the actor helped develop to make it unlike anything he’d done before.

While it’s a shame we won’t get to see what Williams and the Han Solo team created, all the work Williams put in may mean we’ll see him in another Star Wars film at some point. “I don’t think anything in that galaxy is final, and I don’t think that me not being in the Star Wars family is final,” Williams said. “I think something will transpire somewhere down the line. I left with a very good taste in my mouth about the whole family, and I hope that I left a good taste in their mouth. They’re a great group of people, the Lucas family.”

Williams’ comments on the role make it seem like it was fairly substantial, meaning it’s possible someone else will end up filling the shoes of the Han Solo film’s “half-human, half-animal” role. Unless it’ll be easier for production to simply work around the character, that is.