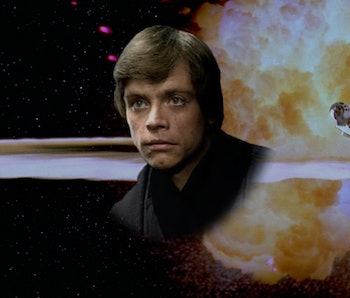 Earth-shattering explosions that rip apart space stations are old hat for the Star Wars universe. The Rebellion blew up the Death Star twice in the original trilogy and Han Solo, Chewbacca, and Finn took out Starkiller base in Star Wars: The Force Awakens.

Star Wars: The Last Jedi director Rian Johnson posted a photo to Instagram on Tuesday that gives Star Wars fans a first look at a massive explosion in the film, confirming that, yes, Last Jedi will stay close to its roots.

The second film in the original trilogy, Star Wars: The Empire Strikes Back, actually had the least number of explosions of Lucas’s first three movies. And since Last Jedi is expected to follow in Episode V’s darker themes and quieter tone, some fans might also expect there to be fewer explosions.

Those fans would be wrong.

And while Johnson’s photo doesn’t contain a lot of detail, it’s still exciting, even in black and white.