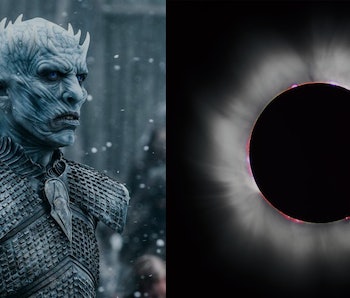 In Game of Thrones, crazy things happen all the time. Just last night, we got a dragon zombie. But, crazy shit happens in the real world too. On Monday, a solar eclipse passed over the continental Unites States. So, as we prep our solar eclipse glasses today, we can’t help but wonder — is there Westerosi version of this? Could the fabled “Long Night” actually have been some sort of supernatural, super-powerful solar eclipse that lasted for far longer than the 2 minutes, 40 seconds the 2017 eclipse will last for in real life?

The Long Night, in case you forgot, was a period of extreme darkness that fell over the known world during an especially bad winter. The White Walkers descended on Westeros, and legends say that it was thanks to the efforts of the Children of the Forrest, the early iteration of the Night’s Watch, and the Last Hero (aka Azor Ahai) that they were beaten back and the Long Night ended.

Clearly, there’s some magical stuff going on. But, consider that there’s already some magical stuff going on in the World of Ice and Fire. As any Maesters who wears a bronze link symbolizing their study of astronomy and stargazing would tell you, seasons in Westeros last years, and they’re not always the same length. There are several theories that attempt to explain this oddity using astronomy (one suggests that a small or distant moon could throw off the planet’s tilt), but George R. R. Martin has confirmed that there’s not a scientific explanation. It’s just fantasy.

Which is just as well. In addition to the impossibly long length of the eclipse, the effects of the long night were felt far around the known world. There are reports of a long darkness from Yi Ti in Essos’s far east. The exact size of the World of Ice and Fire is up for debate, but Yi Ti should be much too far away for it to also fall under the shadow of a moon. Unless, of course, there’s something supernatural going on. And, if there’s something supernatural going on, it’s not really an eclipse.

More like this
Science
8 hours ago
The Webb Telescope will use this epic cosmic gadget to reveal hidden wonders
By Doris Elín Urrutia
Science
4 hours ago
Look! New Webb Telescope image reveals a rare galaxy close to the Milky Way
By Kiona Smith
Science
6 hours ago
5 years ago, scientists observed a new kind of cosmic explosion
By Allie Hutchison
Related Tags
Share: