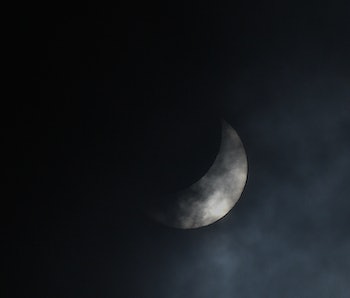 People have been planning for years to see Monday’s total solar eclipse. But all that preparation and all the money spent building toward those magic few minutes the sun disappears behind the moon could all be for nothing if the weather doesn’t cooperate. After all, who wants to see a total solar eclipse that’s hidden behind the clouds?

Clouds are such an enemy of the eclipse-chasing community that some actually refer to it as “the c-word.” That’s not to say a cloudy eclipse is an utter disaster, as it has its own special charms. But those hoping to see the eclipse as it’s commonly pictured really will want clear skies for the experience. Here’s how the site Eclipse2017 describes the cloud experience:

If the sky is completely overcast, it will get VERY dark – pitch black, in fact, to the point where it will be tricky to walk around. If there are broken or scattered clouds, then you will have to hope that the Sun is not behind one of them at the time of totality. If you can re-position yourself to spot where the Sun will be in the clear during totality (this is the REAL “eclipse chasing”!), then you will be able to see the Diamond Ring, the corona, and all the cool effects that present during totality. If the Sun is behind a cloud during totality, you will still experience the temperature drop, and the sunset glow on the horizon – but this is not how you want to see a total eclipse!

The National Oceanic and Atmospheric Administration has published this eclipse cloudiness map to help viewers plan. The coasts and states east of the Mississippi River figure to be those most at risk of clouds.

Still, clouds aren’t necessarily the end of the world when it comes to an eclipse, as a production editor for Science@NASA wrote of his experiences watching an overcast total solar eclipse in Australia back in 2012:

Even as we were urgently wishing the clouds away, I realized their benefit: Clouds act as a natural filter. The partially-eclipsed sun burned an auburn crescent through the gray fluff overhead. Onlookers unwisely but irresistibly took off their eclipse glasses for the kind of direct view that would have been impossible under clear skies. It was mesmerizing…

Totality was supposed to last two minutes, and we had only seen three seconds of it. Remarkably, no one seemed to mind. Along the Four Mile Beach, thousands of people stood in the cool center of the Moon’s shadow, wrapped in lunar darkness, staring mesmerized at the cloudy spot where the eclipse was playing out behind a puffy gray veil of water droplets. One brief glimpse of the sun’s corona had sent an electric jolt through the crowd, and we were frozen to the spot.

One minute and 57 seconds later (an interval that seemed much shorter) the Moon slid off the solar disk. The clouds abruptly blossomed with light. It looked like an explosion had taken place in the atmosphere not far above our heads. Iridescent colors appeared around the edge of the clouds as water droplets diffracted the rays of surging light.