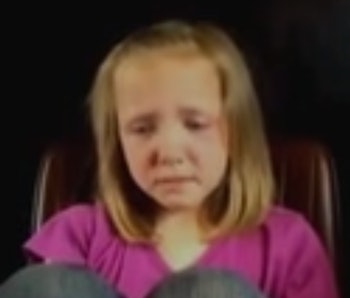 Depression costs a lot of money. Lost productivity, doctors bills, we're talking billions of dollars a year. So based on this latest research, anti-bullying programs might be one of the best investments schools can make in the long run.

The L.A. Times reports that a newly published study says depressed adults are more likely to have been bullied as kids - teased, blackmailed, harassed - frequently at the start of their teen years. The longer they were victims, the more likely that they’d develop depression in their adult years. Teens who weren’t bullied were only a third as likely to become depressed.

The entire study is available over at BMJ. The majority of kids said their bullying was never reported to teachers, so it’s uncertain how much these numbers might drop if the school pulled some of their tormentors aside and did something to discourage the sadistic little shits. Seems like that’s worth encouraging for the next study, no?

More like this
Culture
Jan. 28, 2023
These 50 cool things for your home have fanatical Amazon reviews
By Christina X. Wood
Culture
Jan. 22, 2023
Shopping editors are calling these hidden gems on Amazon their most amazing finds of the year
By Cassandra Seale and BDG Commerce
Innovation
Jan. 19, 2023
A robot choreographer reveals why M3GAN — and all robots — should dance
By Molly Glick
LEARN SOMETHING NEW EVERY DAY.
Related Tags
Share: