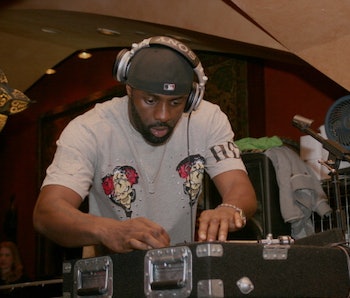 On Monday Skepta posted a remix to his grime banger “Shutdown” on his SoundCloud. The new featured artist: Idris Elba, a.k.a. Stringer Bell from The Wire. Elba, a strong candidate to be the next James Bond, is a slick talker on screen and proves that he can hold his own behind the mic, too. In his own words: “Ain’t nobody else Stringer Bell / Boy from the East End did well.” “Shutdown,” however, isn’t the first time Elba has tried his hand at rapping. He’s a noted Ibiza DJ, but has also rapped under the King Driis moniker to varying degrees of success.

You would think that someone with such a celebrated acting career could perform dutifully in a music video. He’s won a Golden Globe and been nominated for multiple Emmys for his role in Luther. How hard is a one-and-a-half-minute intro? Apparently very. Maybe he needs a suit to really get into a role.

Anyway, once Elba goes in, he does not fail to hold attention. His acting range demonstrates that he is in full control of his natural Hackney accent, but here he decides to go for the fake patois. He's not the first rapper to make the mistake, but its strangeness is highlighted by featured artist Shadow's straightforward bars. 9th Wonder's nearly-reggae production is a saving grace, though, turning the song into a fun event.

Fatboy Slim recently gave Mark Ronson and Bruno Mars' superhit "Uptown Funk" a dub treatment. Who better to invite than Idris Elba to provide some vocals? We just saw his vocal style is whatever he wants it to be. Elba does his take on Mars's now-iconic hook, but can't quite hit the same high notes. Outside of hook action, Elba spits some rapid-fire shoutouts to Fatboy Slim at the song's close. "Uptown Funk (Dub)" is Elba's best case for becoming a house vocalist, if the acting and rapping don't work out.

"Sex in Your Dreams"

Is it really bragging when you're consistently in the conversation for sexiest man alive? As Driis, Elba has some seriously lame rhymes about why you should have sex with him: "I ain't the one to beat around the bush / But I'm the one to beat you 'round your bush, mama." …

At least his "Shutdown" verse is good!

More like this
Gaming
Sep. 22, 2022
You need to play the funniest music game ever made ASAP
By Joseph Yaden
Gaming
Sep. 15, 2022
How 'Metal: Hellsinger' forged an unholy alliance between gamers and metalheads
By Cian Maher
Entertainment
10 hours ago
Sauron cultists? Rings of Power may have just solved the show's biggest mystery
By Alex Welch
Share: