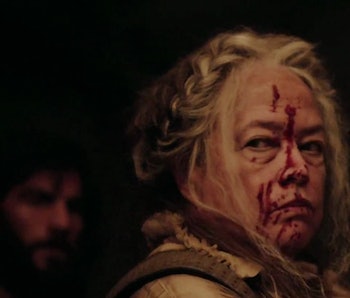 According to American Horror Story, the Roanoke Colony disappeared without a trace after its ousted leader gave herself over to the powers of an old-world witch, portrayed by Lady Gaga, and forcibly took back control of the colony in a bloody fashion. In the show, Thomasin White, aka “The Butcher,” played by Kathy Bates, led the colonists away from Roanoke to find more people to sacrifice.

In reality, the Roanoke Colony was found abandoned on August 18, 1590, 427 years ago today. To this day, no one knows what really happened, and while there are a lot of theories, it seems unlikely that a Lady Gaga-esque witch whisked the colonists away. They’re probably not all living as cursed spirits, hunting down the blood of anyone who would dare defile their land.

Founded in 1587, the Roanoke Colony was Queen Elizabeth I’s attempt to finally create a permanent English settlement in North America after a few years of military interventions that didn’t go over too well. Among the colonists were 90 men, 17 women, and 11 children. The colony’s founder, John White, set out for supplies but was waylaid by the Anglo-Spanish War for three years and unable to return. When he finally did get back to the colony in 1590, everyone was gone.

The word “Croatoan” was etched into a gatepost leading to the settlement’s fort and and “Cro” was carved into another tree, but, otherwise, they colonists had disappeared without a trace or a hint as to their location.

Historians and conspiracy theorists alike have wondered as to what happened, and everything from integration into local tribes to demons has been explored. But the mystery remains.