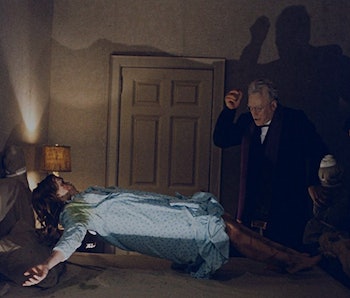 If you’ve ever dreamt of saving an ill-fated family from a demon, then you’ve probably got a lot of work ahead of you. Exorcisms, the bread and butter concept in horror movies about demon dolls and levitating kids, aren’t a simple affair. The Catholic faith, which holds that demons and exorcisms are very real and not something to be trifled with, is happy to keep its processes secret and complex. Therefore, it’s pretty difficult to become a horror movie-worthy exorcist.

Aside from a rigorous training process, there’s also the fact that the exorcisms you’ve seen in horror films aren’t realistic in any way.

That’s not to discount other religions and their individual exorcism practices; it just so happens that Catholicism is the religion usually featured in horror films, and therefore it’s the religion most prominently associated with exorcism.

So what do you need?

You have to be a priest to perform exorcisms in the Catholic faith, no exceptions, no substitutions. That really puts a damper on who can be an exorcist at all. With the rights of an exorcist comes the social issues often associated with the Catholic church. Women can’t be Catholic priests, and that’s not even taking into account people of non-binary genders. So, straight, cisgendered men are really the only Catholic exorcists you’ll ever get.

To be an exorcist — at least, to be a Catholic exorcist — you have to be a priest. And, as you might imagine, it’s not too easy to, uh, become a priest.

But after you become a priest, which involves wanting to do it in the first place, going to seminary, getting ordained as a deacon, and getting the approval of a bishop, then you might get to be an exorcist.

And, even then, it’s a hard road. According to Mary Chasteen, the auxiliary and right-hand-lady to Father Vincent Lampert, Exorcist of the Catholic Archdiocese of Indianapolis and Pastor of Saint Malachy Parish in Brownsburg, Indiana, not only is there a lot of training required to be an exorcist of the Catholic church, but you shouldn’t really want the position in the first place.

Chasteen told Inverse that the “most effective exorcists I know are willing to [work as an exorcist], but they don’t necessarily want to do it. It’s sort of like being an emergency room nurse — you’re skilled, you can go in, you know you can do it, you’re willing to do it, but nobody wants the carnage. You’re willing to help, but it’s not the carnage you focus on. Because it’s very painful. You see people at their worst. It’s excruciating to watch. There are usually a lot of painful things in the person’s past. Family members range from, ‘thank God they’re getting help’ to cussing you out; not everybody’s on board. It’s a very difficult, sticky situation. I think a lot of people sort of glamorize it.”

When pressed on the subject of joining the church to fight demons, Chasteen says, “you should not be egotistical about the ministry. Because you’re looking at evil.”

Fr. Lampert, the priest Chasteen works with as a partner-in-exorcism, completed a master’s course at the Vatican on exorcism in 2012, with Chasteen following him at every turn. They studied together to complete the course and now work in tandem to help people who have been, according to the Catholic faith, afflicted by a demon (or, rather, multiple demons) and possessed.

“We sat through every training session together, we discussed the ministry, so I know directly where he stands,” Chasteen says. “We are of the same mind, philosophically. But, even if we weren’t, I would still differ to his way of thinking — because it’s his ministry. He’s the exorcist, that’s the bottom line.”

The course, which is intensive and only for priests (Chasteen was expected by the Church to act as more of an assistant despite the partnership she shares with Fr. Lampert), isn’t something to take lightly. So, if you’re looking for a simple vocation, maybe try something non-demon related.