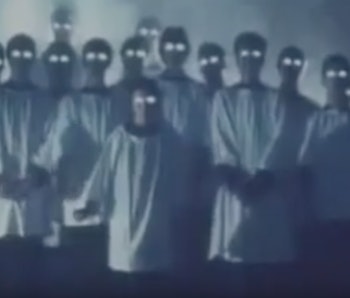 Before the Great Eclipse of 2017, one eclipse reigned supreme in America: the one that plagued the one Bonnie Tyler in her epic hit about crushing sadness, “Total Eclipse of the Heart.” However, because the song was released in 1983 and the last total eclipse in the United States was in 1979, Tyler has never had the chance to perform her song in the midst of its namesake darkness.

But this is the year the two great eclipses will finally align.

On Wednesday, Tyler announced that she will perform her hit song during the August 21 eclipse on a cruise ship called Oasis of the Seas. The ship, traveling from Orlando to the Caribbean, will sail in the path of the totality.

It isn’t totally clear, however, how Tyler will time her song to perfectly align with the eclipse. True “Total Eclipse” devotees know that it’s notoriously long, with the album version clocking in at a full 6 minutes and 59 seconds. The August eclipse, in contrast, will last, at most, for 2 minutes and 40 seconds for viewers in the Midwest, and it will be even shorter-lived for people watching on the coasts.

Since Tyler will be off the coast of the Atlantic, she’s not going to have much time to sing her hit.

She and everyone else watching the eclipse — which includes Joe Jonas’ DNCE, Tyler’s backing band for the night — will gain a newfound appreciation for just how rapidly the Moon moves in relation to the Earth. The reason eclipses are so short-lived is because they’re dependent on how long the Earth spends in the moon’s shadow, which is known as its umbra. As an article on Space.com recently explained, the cone-shaped umbra is:

…about 235,000 miles (378,000 kilometers) long. But the moon’s average distance from Earth is about 239,000 miles (385,000 km). So, in order for the umbra to touch the Earth, it must be closer than the average Earth-moon distance. But even when the moon is at the closest point to Earth in its elliptical orbit, the umbra is but a dark \”dot\” measuring no more than 170 miles (274 km) across. And many times, the shadow width is considerably smaller than that. During the Aug. 21 total solar eclipse, for example, the shadow will average only about 68 miles (109 km) wide.

We don’t know the exact trajectory of the Oasis of the Seas, but if it’s en route to the Caribbean along the path of totality it will likely experience roughly 1 minute and 51 seconds of total darkness starting at 17:28 UTC, as NASA’s interactive solar eclipse map shows.

Though it’s incredibly lit throughout, the album version of Tyler’s song, arguably, really starts to turn up around the 4:30 mark, as her voice begins to ramp up its raspy desperation (“Every now and then I fall apart!”). To achieve optimal pathetic fallacy, she’ll want to start singing precisely at 17:23 UTC. This way, the song’s legendary piano-driven denouement (“Once upon a time there was light in my life/Now there’s only love in the dark”) will serenade the sun as it casts its bright eyes back on Earth.

More like this
Science
6.27.2022 8:15 PM
NASA mission to an ancient mini-planet in our Solar System suffers major setback
By Doris Elín Urrutia
Science
13 hours ago
JWST will unlock the mysteries of these 7 peculiar exoplanets
By Jennifer Walter
Science
12 hours ago
Webb Telescope will take aim at one of Hubble's most iconic targets
By Georgina Torbet
Related Tags
Share: