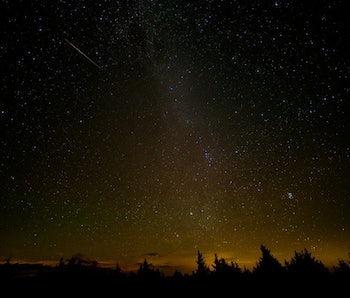 To connect with your primeval ancestors this month, look to the sky. Humans have recorded seeing the Perseid meteors fall annually in August for nearly 2,000 years. While this occurrence won’t be Perseid’s brightest, it’s still a chance to gaze at the exact same cosmic rocks that awed ancient Romans when their empire was at its peak and ancient Indians when they made use of the newly-compiled Kama Sutra under the stars.

The Perseid shower is already underway and will peak this Saturday. The best time to view it is in the early morning, when the sky tends to be darkest, though over half of the meteors may still be obscured by the light of the moon.

“This year, we are expecting enhanced rates of about 150 per hour or so, but the increased number will be cancelled out by the bright Moon,” NASA’s Bill Cooke wrote in a blog post, “the light of which will wash out the fainter Perseids. A meteor every couple of minutes is good, and certainly worth going outside to look.”

People who live in the northern hemisphere or above the mid-southern latitudes will get the best glimpse of the shower. Focus your attention between the northeastern horizon and the point right above you; the meteors will fly at many different angles, but will all come from the approximate direction of the Perseus constellation. Check out this updated table for the exact angle to look based on your location.

What causes this annual majesty? Meteors are pieces of space debris that fall to Earth. Perseid debris comes from a cloud stretching behind the Swift-Tuttle comet, which flies around the sun in a 133-year orbit. Earth is currently passing through Swift-Tuttle’s tail, which is why some of its rocks are colliding with our planet.

Perseid debris isn’t dangerous (at least, not for us on Earth). Most of the meteors will be the size of grains of sand. But that won’t make them any less beautiful; don’t miss the chance to see their streaks light up the sky.