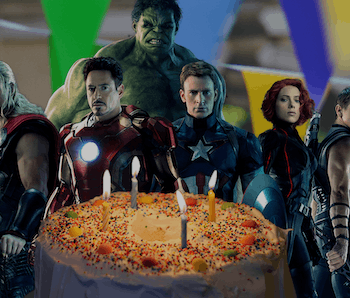 In the wake of Thor: Ragnarok, the entire Marvel Cinematic Universe was changed, setting the stage for Avengers: Infinity War. Thor lost an eye, and his home realm was destroyed by a giant demon and Cate Blanchett. Time also passed for our heroes, though gods like Thor and Loki rarely look any older for movie to movie. However, Bruce “the Hulk” Banner isn’t a god, he’s a mortal man and he’s way over thirty.

In fact, the vast majority of the Avengers are way over 35. But how many of them are over 40? Over 50? The answer to this may actually shock you. Though many of these brave men, women, aliens, and super-intelligent living computers look young and fit, their actually ages might not reflect their super look.

Even though all the cinematic Marvel heroes benefit from some Hollywood level skincare regimen that leaves them eminently thirst-worthy, their canonical ages might shock some fans. Mostly because by the time we get to Avengers: Infinity War, it turns out that a huge chunk of your favorite heroes are, well, over 30, and many of them are pushing 50.

Unless otherwise noted, all of these ages are based on information from the films, the MCU Wiki, or our own conjecture, where necessary. This list only includes characters who are thought to appear in Infinity War, which takes place in 2018. So their ages here reflect how old they’ll be then. These numbers —like the MCU Wiki — also presuppose that the MCU films began in 2008 with Iron Man, and that the chronology developed from that point. For example: Despite being released in 2017, Spider-Man: Homecoming mostly takes place in 2016, because it happens shortly after Civil War. Ditto for 2017’s Guardians of the Galaxy 2, taking place in 2014, right after the first movie.

Based on these calculations, it turns out the average age of an MCU character is 42.6. However, the age that appears the most often is 49 years old. For convenience, we’ve broken up these characters into three categories: the Millennials, the Olds, and the Really, Really Olds.

Mild spoilers for all the MCU are below.

Vision was “born” during Age of Ultron, which takes place in 2015. So, if time is passing at the same speed in the MCU as it is in the real world, in Infinity War Vision will be 3 years old.

The current version of Groot was born in 2014, just a few days after the last Groot “died.” In Groot years, he’ll be a teenager in Infinity War, but in human years he’s only 4.

In 2014, Gamora is supposedly 25 years old, in Zehoberei years. If the Zehoberei year is the same length as Earth years, she’ll be 29. This means there is a minimum of a nine-year age gap between her and Star-Lord anyway you look at it.

Wanda’s birthday seems to be unknown, but if she’s the same age as the actor who plays her — Elizabeth Olsen — then she was born in 1989. This means she’ll be 29 in Infinity War.

Because she’s part-cyborg, figuring out Nebula’s age is tricky. Both her and Gamora being raised by Thanos doesn’t help, either, since they’re both adopted. But, Karen Gillian (Nebula in real life) will be 30 next year. We don’t know what that is in Luphomoid years.

Mantis seems young in Guardians of the Galaxy 2, but we don’t know when she was born. The actress who plays Matnis — Pom Klementieff —was born in 1986, meaning she’ll be 32 in Infinity War.

Natasha was born on November 22, 1984. By most definitions this makes her a millennial, but only barely. Also, as will become apparent, this makes the age difference between her and Bruce Banner pretty significant.

Not a huge surprise here, but the badass former director of S.H.I.E.L.D. was born in 1951. To be clear, Nick Fury might not be in Infinity War, but it seems pretty likely.

Bruce Banner was born on December 18, 1969. So while Bruce Banner is 49, the Hulk, his alter ego, is only 13. The radiation experiment which caused Banner to sporadically become the Hulk happened in 2005, meaning by 2018, the Hulk is 13. In a sense, thinking of the Hulk as a child or preteen sort of explains a lot.

Like many of these characters, Ant-Man likes to keep his birthday a secret. But because he looks exactly like Paul Rudd, we’re going to say his birthday is in 1969.

He looks like the Earthling named Dave Bautista, whose birthday is also in 1969. So Drax, in human years, will probably be 49.

Clint was born on January 7, 1971. Despite being cooler than Tony Stark and having a family, he’s totally from Tony’s generation.

T’challa’s birthday isn’t specified in either the Earth-616 incarnation or in the MCU. So, like Wanda, we’ll base his age on the age of the actor: Chadwick Boseman. Boseman was born in 1976, meaning he’ll be 42 next year.

Because he’s a magician, Stephen Strange has hidden his true age and disguised himself to look like the famous actor Benedict Cumberbatch. Born in 1976, Cumberbatch will be 42 in 2018, so Strange probably will be, too.

Sam Wilson was born in 1978. So, by the time he’s back with the Avengers for Infinity War, he’ll straight-up be 40.

Peter Quill was born in 1980, making him 34-ish in both Guardians of the Galaxy movies since they both take place in 2014. So, when he makes it back to Earth for Infinity War, he’ll be 38.

Everyone’s favorite member of S.H.I.E.L.D. was born on April 4, 1982. According to the MCU Wiki, this is the same date as Cobie Smulders in real life.

The Really, Really Olds and the Ageless

Steve Rogers was born on the FOURTH OF JULY in 1918. This means he’ll be a full century old when Infinity War goes down in 2018. Obviously, for a big chunk of his life Captain America was frozen in ice, which means he’s “really” only 33, but whatever. It’s way better to think of him as 100.

Same as Steve, Bucky was frozen for awhile, meaning his age is somewhat longer than it would be “normally.” Born on March 10, 1917, Bucky is a year old than his childhood BFF.

He’s a god. Does he just exist forever? Probably. If he didn’t get his hair cut in the upcoming Thor: Ragnarok, would it eventually fill the whole universe? Probably.

The oldest person in Infinity War probably has to be Thanos, if only because he is in possession of a super-power glove — the Infinity Gauntlet — that grants him enough powers to be even more god-like than the other legit gods on this list. Even if Thanos is only like 50 in Infinity War (like Josh Brolin), these powers must take some kind of toll.

Infinity War will hit theaters on May 4, 2018, which means it totally could depict a birthday party for Vision.