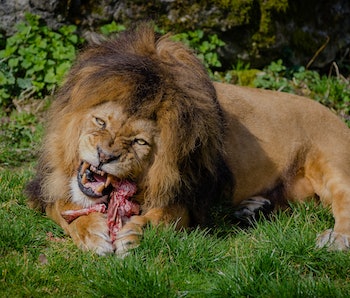 The color of your t-shirt is sending signals far beyond how trendy you are. In a study published Thursday in PLOS ONE, scientists found that Western fence lizards most feared approaching humans that wore T-shirts that didn’t match the vivid blue coloring on their own abdomen and throats. In contrast, the lizards most tolerated the presence of humans that wore these blue shirts, suggesting that the choice of clothing color might minimize wildlife disturbance.

“What we wear can have indirect effects on animals through changes in their behavior,” said Breanna Putman, a behavioral ecologist at the Natural History Museum of Los Angeles and the study’s lead author, in a statement.

To prove it, Putman and her team visited two lizard habitats in the Santa Monica Mountains of Southern California. One site, Griffith Park in Los Angeles, is heavily trafficked by people. The other, Stunt Ranch, receives significantly less foot traffic (15 people per hour versus two people per hour).

At each site, Putman approached the blue-throated western fence lizards wearing four different shirt colors: dark blue, light blue, grey, and red. Over about three weeks, Putman spotted lizards and then started walking towards them, at which time researchers measured “flight initiation distance,” or FID. FID is the distance an animal travels in response to a threat. Accordingly, the longer the distance an animal flees, the greater the perceived threat.

The results supported the theory that animals are less fearful of colors that are present on their own bodies. On average, the fence lizards fled around 100 centimeters from the dark blue shirts, which most closely resembled the coloring on their throats and bodies. Light blue shirts caused the lizards to flee a greater distance, typically around 140 centimeters. The red shirts, however, seemed to instill a substantial amount of fear in the perceptive reptiles, as they fled some 220 centimeters away.

What’s more, after a few days of approaching lizards, Putman attempted to catch the terrified animals. The lizards who fled after seeing a dark blue shirt were twice as easy to catch as the lizards responding to a red shirt. This suggests that the lizards reacting to like-colors were not as panicked, more easily succumbing to capture.

Although the study can benefit from testing different animals in different environments — to better illustrate the theory — this lizard study demonstrates that just our clothing can have a significant effect upon wildlife. This is relevant for hikers, eco-tourists, and scientists alike. If we know that purple causes bison, elk, or elephant seals to flee, we can avoid wearing that color in the wilderness — even if that means sacrificing style.

Abstract: Animals often view humans as predators, leading to alterations in their behavior. Even nuanced aspects of human activity like clothing color affect animal behavior, but we lack an understanding of when and where such effects will occur. The species confidence hypothesis posits that birds are attracted to colors found on their bodies and repelled by non-body colors. Here, we extend this hypothesis taxonomically and conceptually to test whether this pattern is applicable in a non-avian reptile and to suggest that species should respond less fearfully to their sexually-selected signaling color. Responses to clothing color could also be impacted by habituation to humans, so we examine whether behavior varied between areas with low and high human activity. We quantified the effects of four T-shirt colors on flight initiation distances (FID) and on the ease of capture in western fence lizards (Sceloporus occidentalis), and we accounted for detectability against the background environment. We found no differences in lizard behavior between sites. However, lizards tolerated the closest approaches and were most likely to be captured when approached with the T-shirt that resembled their sexually-selected signaling color. Because changes in individual behavior affect fitness, choice of clothing color by people, including tourists, hikers, and researchers, could impact wildlife populations and research outcomes.