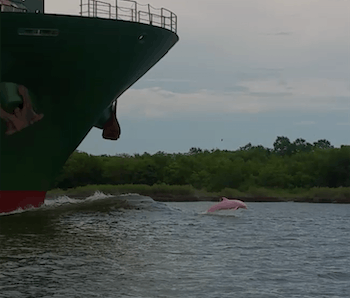 Pinky” the Dolphin, the most popular albino ocean-dweller, has been spotted; and this time, she has some young and equally pink company.

On Saturday, Bridget A. Boudreaux reported to KPLC that she’d seen Pinky in the Calcasieu Ship Channel near Hackberry, Texas. She sent the outlet a picture of the dolphin (see below), and said that she’d spotted a second pink dolphin that disappeared before she’d been able to ready her camera.

Folks have been hoping for such news; after Pinky was seen mating with a bunch of male dolphins in August 2016 — female dolphins are already aggressively pursued by males because they give birth so rarely, and Pinky seems to be especially attractive in dolphin terms — people wondered whether she might be pregnant, and whether any offspring she produced would also be pink.

It didn’t seem very likely: Her pink color comes from albinism, which is a genetic mutation. Albinos’ skin has little to no pigment, but Pinky’s blood vessels show through her colorless skin and make her appear pink.

For Pinky to give birth to a pink calf, she’d need to mate with a dolphin that also had that genetic mutation. Pink offspring still wouldn’t be guaranteed in that scenario, because it’s a recessive gene; there’d be a 50 percent chance that her calf would be pink.

Incredibly, it seems as though the stars have aligned to bring another pink dolphin into the world. Of course, we can’t actually accept Boudreaux’s claim without photographic evidence, and even if we could, it’s not clear who this other pink dolphin is. It could be another adult, but that seems like a less likely scenario since these animals are so rare: Only 14 pink bottlenose dolphins have been identified since 1962.

Well, if Boudreaux did see what she said she saw, we’re bound to get more photos of that second pink dolphin sooner or later. Like many kids, Pinky Jr. just might be a little camera-shy.