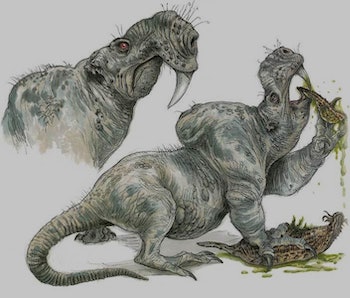 The Star Wars galaxy is full of alien species, ranging from sentient favorites like the Mon Calamari of Admirable Ackbar fame to less intelligent creatures like the Gungan-favored, slobbering Blarth. Not all of these strange creatures are fun to look at. Some are downright dangerous, threatening our heroes in a galaxy far, far away and frankly haunting us as children.

Some Star Wars creatures are freaky, even terrifying.

And the Star Wars expanded universe — which encompasses blockbuster films, television shows, books, comics, video games, toys, and more — is difficult to keep up with, with each new installment introducing brand new creatures in various ecosystems on different planets. When you have an entire galaxy’s worth of diversity to work with, your imagination is the limit, and the powers that be over at Lucasfilm have really taken that to heart over the years.

Here are the 10 freakiest creatures in Star Wars history, ranked.

Standing at about 9 feet tall with flappy little wings and a half-dinosaur, half-rooster head, the Tatooine-native Woodoo certainly qualifies as “freaky.” They make nests out of scrap metal and their own hardened droppings, and use their powerful talons and beak to make up for their slow movements.

Small, furry, and distinctly rabbit-like, Hoojibs appear pretty frequently throughout various Star Wars novels. One in particular named Plif hung out with Luke Skywalker for a period of time (in a Star Wars comic). Yeah, Hoojibs are cute, but what makes them freaky is their telepathic abilities and their habit of feeding on the energy of others. Cute and fuzzy doesn’t always equate harmlessness. Who wants a bunny digging around in their brain?

You know these dudes. A Colo Claw Fish attacked Qui-Gon Jinn, Obi-Wan Kenobi, and Jar Jar Binks’ transport (a Bongo) when they got stuck in an underwater cave for a hot second in Star Wars: The Phantom Menace. As the second-largest underwater predator on Naboo, Colos are covered in phosphorescent ridges and are equipped with enormous, snapping jaws and pincer-like claws.

Okay, again, cute doesn’t not equal creepy. Voorpaks are kind of cute, yeah, but just look at those tendrily little legs — there are eight of them, making the Naboo-native Voorpaks similar to spiders. They’ve got tiny, needle-like teeth and tend to be aggressive when threatened. But, it’s important to point out that Naboo royalty has a habit of adopting them as pets, so at least they’ve got that going for them.

The Star Wars universe’s version of Bigfoot. Goraxes are reclusive creatures but sometimes appear to attack Ewok towns on Endor. Incredibly strong and often aggressive, a Gorax was the main villain in the fabulously campy Caravan of Courage: An Ewok Adventure, which premiered in 1984. At least the Rebellion didn’t encounter a Gorax during Star Wars: Return of the Jedi on Endor.

Here’s another familiar face. One of them was used in the Petranaki arena on Geonosis (though they’re native to the planet Cholganna) and set on Senator Padme Amidala. It managed to scratch her outfit into a convenient crop top with its viciously sharp claws, but she beat it in the end with Anakin’s help. Nexus four red eyes give them infrared vision and its pointed teeth, spine quills, and tail make them deadly hunters.

If the Dagobah python doesn’t give you nightmares, nothing will. With the ability to swallow up to 15 times its body weight, this nasty, bulging snake hangs itself over tree branches and wraps around trunks just above the swamps of Dagobah, waiting for unassuming prey to fly or run by.

The urban planet of Coruscant is filled with mutated creatures, but the Hive Rat takes the cake for the creepiest of them. They can grow up to 9 feet in length, are mostly hairless, and believed to be the result of ecosystem damage and exposure to sewage, pollution, and reactor radiation. Hive Rats tend to travel in packs and are known to eat anyone they come across in the sewer systems.

Okay, so you know about the Sarlacc, but do you know what this thing actually looks like below the surface? It’s essentially the Tatooine version of an iceberg, only showing the smartest part above the water (or, in this case, the sand). These horrible creatures reach full maturity at 30,000 years old and bury themselves in the sand, growing up to 100 meters in length. Young males, the parasites of their species, attach themselves to fully-grown females and suck the life out of them — which feels like a weird metaphor for most of the female characters in Star Wars, but let’s not get into that.

Unused concept art for Return of the Jedi first detailed the Temptor back in the day. It’s basically just a fleshy, mucus-covered, tree-dwelling snake with claws and multiple eyes (which is probably one of the grossest sentences ever written and I’m sorry for subjecting you to it). Temptors have furry tongues they use to lure in prey and can squeeze into just about any tight spot due to that aforementioned mucus covering its body.