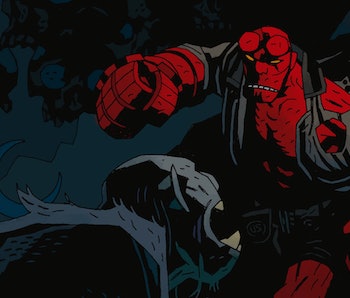 From the exciting casting of Stranger Things star David Harbour as the title character, to news of its R-rating, it seemed like the new Hellboy movie was making all the right moves. But, nobody’s perfect. A small but undoubtedly cool aspect of the Hellboy reboot has been changed.

On Wednesday, IGN reported that the ridiculously awesome subtitle for the film, “Rise of the Blood Queen,” will no longer be a part of the film’s title. The reboot had previously been listed with that subtitle, which first appeared in promo art for the film. It’ll be going as just Hellboy for the time being. Which, aside from the “Hell” part, is a title that gives no indication of the potential for mind-blowing R-rated action-horror that lies within.

Maybe the team behind the reboot thought “Rise” made it seem like the Blood Queen would be a longer-term enemy, when she’s going to be dealt with in the first film. Or maybe they wanted the general viewer to see it as a definitive new entry point to the character. Perhaps they thought they could one-up themselves and come up with an even better title (fingers crossed). For now, though, we’ll have to deal with just Hellboy.

Just Hellboy is expected to open in 2018.