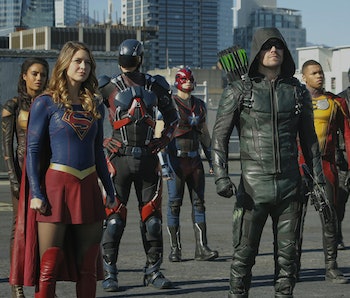 The big, four-show crossovers are probably fans’ favorite part of every season of DCTV, and now the CW has spilled some details about the upcoming crossover. Not only do we know when it’ll happen, but we also know that it will be a little easier to watch, thanks to a schedule change.

At the Television Critics Association summer press tour on Wednesday, the CW said that the heroes of DCTV would crossover for two nights this fall. Supergirl will kick off the event on on Monday, November 27, and it will be followed by Arrow, which is moving to Monday for the occasion. The Flash and Legends of Tomorrow will finish up the crossover on November 28.

This is promising news for fans who felt that last year’s four-night crossover was too much to keep up with (even if the bulk of the event just took place in three episodes, since Supergirl was barely a crossover). But for those hoping the show will continue this trend, don’t get your hopes up.

“Last year’s [crossover] was the most successful week in CW history in terms of ratings and everything,” CW President Mark Pedowitz said. “We felt in this particular case we had Flash on Legends paired, so it was better to make it a two two hour movies –a miniseries- we thought this was the best way to go. We had a lot of conversations with producers and marketing people. Next year, we might go back to four nights.”

Pedowitz didn’t reveal the premise of the crossover at the event, but he hinted that “romance is in the air” for the episodes. This aligns with comments the Arrowverse’s executive producer Greg Berlanti made about the planned crossover. Fellow executive producer Marc Guggenheim spoke to Entertainment Weekly in June, and he recalled Berlanti’s stance on trying to top the previous alien invasion crossover. “Greg said there’s probably no way to get bigger than aliens, so the best way to make the [next] crossover especially epic is if you can’t increase the bombast, increase the emotional stakes and the emotional payoffs.”

We’ll know if they’ve succeeded in this goal when the crossover finishes on November 28.

Supergirl Season 3 premieres October 9. The Flash and Legends of Tomorrow return on October 10. And, Arrow Season 5 will start on October 12,