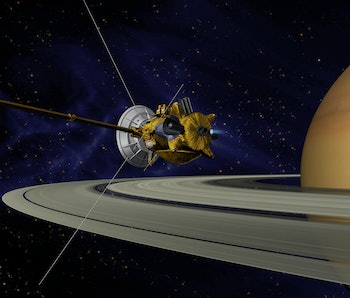 NASA listed a job last month for a planetary protection officer. The gig comes with a six-figure salary, plenty of travel, and a secret security clearance, but most of the news coverage has focused on one key detail: This job is all about defending Earth from aliens.

The real duties of a planetary protection officer are the reverse of that. Most of the time, it’s we Earthlings who are the alien invaders that other planets need protecting against. That might not sound as exciting as defending Earth from extraterrestrials, but it’s critically important — and something we need to be extra careful about if we do someday want to be certain we have discovered life on other worlds.

Let’s take a look at the actual job listing from NASA, which, yes, pays between $125,000 and $187,000. The description makes it clear it’s Earth organisms traveling to other planets that is the big worry for the space agency.

Planetary protection is concerned with the avoidance of organic-constituent and biological contamination in human and robotic space exploration. NASA maintains policies for planetary protection applicable to all space flight missions that may intentionally or unintentionally carry Earth organisms and organic constituents to the planets or other solar system bodies, and any mission employing spacecraft, which are [i]ntended to return to Earth and its biosphere with samples from extraterrestrial targets of exploration.

If a NASA probe goes into space carrying microbes from Earth, it’s possible those tiny organisms could get mixed in with whatever it collects from, say, Mars or one of Saturn’s moons. Scientists could then later mistakenly identify those microbes as being from one of those other planets, making us think we found alien life. That would be one of the most monumental discoveries in all human history, so we really want to get it right the first time.

NASA takes planetary protection seriously, even when the spacecraft in question will never land on another world. The Cassini probe, for instance, is set to burn up in Saturn’s atmosphere in September as a way to ensure it never crashes into and contaminates one of the planet’s potentially life-supporting moons.

All these are examples of what’s known as “forward” contamination, where organisms are transferred from Earth to another planet. The planetary protection officer does also have to concern themselves with “back” contamination, which is the risk of aliens — strictly of the microbe variety, of course — coming back to Earth that most reports are focusing one. But this is a small part of a job much more concerned with keeping the rest of our solar system free of Earthling contamination. Until further notice, we’re the only aliens we should be worried about.