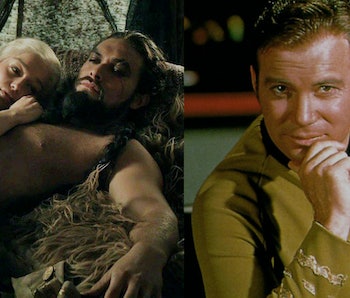 Captain Kirk, Spock, and the rest of the Enterprise crew got up to some pretty scandalous stuff back in the ‘60s. At least, they did for the time. Maybe they learned a few tricks from their in-universe predecessors, the characters featured in the upcoming Star Trek: Discovery.

Discovery’s placement on CBS All-Access rather than a usual network channel certainly opens it up to a bit more realistic sexuality amongst its characters. But showrunners Aaron Harberts and Gretchen J. Berg told Entertainment Weekly that while the series will be a “hard PG-13,” don’t expect any full-frontal nudity, outright sex scenes, or, really, the same kind of gratuitous underwear shot J.J. Abrams pulled with Carol Marcus (Alice Eve) in 2013’s Star Trek: Into Darkness.

Star Trek is still, at the end of the day, a family show.

“Every writer’s impulse when you get to work on the streaming shows with no parameters is to go crazy,” Harberts said. “But then you look at things like: How does nudity play on Trek? Eh, it feels weird… I would say we’re trying to push more by having the type of complicated messed-up characters who aren’t necessarily embraced on broadcast.”

Harberts followed that up with a clarification, adding: ““I’m not saying we’re not doing some violent things or doing a tiny bit of language. But what’s important to the creative team is the legacy of the show — which is passed down from mother to daughter, from father to son, from brother to brother. We want to make sure we’re not creating a show that fans can’t share with their families. You have to honor what the franchise is. I would say we’re not going much beyond hard PG-13.”

But while later series such as Star Trek: The Next Generation were staunch and ultimately family friendly (but no less fun), the original Star Trek series often took things pretty far, pushing network rules to the breaking point. A lot of that was due to costume designer William Ware Theiss, who was known for putting the show’s guest stars, especially its female guests, in revealing clothes that would have even pushed the envelope today.

Theiss called this bold costuming the “Theiss Theory of Titillation,” which was first quoted in Stephen Whitfield’s The Making of Star Trek (1968) as being “the degree to which a costume is considered sexy is directly dependent upon how accident-prone it appears to be.”

While Discovery probably won’t take things nearly as far as Weiss oft-infamously did, the show is already pushing against other expectations, boldly going just as Trek has always done.