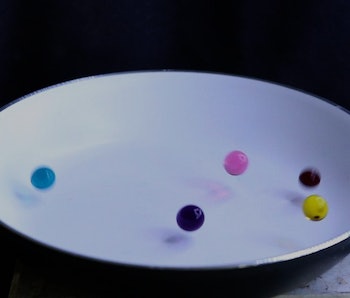 Viral internet content isn’t always just a distraction from the important things. Sometimes they are the important things. Take, for instance, the case of some Dutch researchers who were inspired by a YouTube video of gel balls soaked in water, shrieking and bouncing around a hot skillet surface like they were sugar-addled toddlers running amok on a playground. Realizing those screaming balls are bursting with kinetic energy, they came up with a whole new way to power the robots of the future.

Here’s the deal: Scott Waitukaitus and his colleagues at the University of Leiden were one of millions to watch this 2015 video of polyacrylamide gel balls zipping around a hot skillet surface after they were covered in water. They wanted to figure out why this was happening, so they took their own hydrogel beads, soaked them in water, and dropped them into pans heated up to about 419 degrees Fahrenheit. The researchers then watched the science happen and recorded their observations in a new paper published in Nature Physics.

When the balls were dropped from a height of fewer than four centimeters, they bounced continuously and rose in altitude until they stabilized their bounce at around four centimeters, thanks to the kinetic energy from the vaporized water. When dropped at higher altitudes, they lost height until stabilizing at, again, the 4-centimeter height.

The major takeaway, however, is what can be practically done with such a weird phenomenon. These hydrogel beads could be used in soft-bodied robots to allow appendages like claws to open or close when water and an electrical current is pumped through that machinery.

That’s good news for researchers looking to create robots made of hydrogel. It’s not an easy material to get moving around automatically. Water and heat could be an extremely useful key in making such bots work more rapidly, and with greater application.

A high-speed camera was able to observe that the balls generated steam under the elastic surface, from which the gel would curve up and release the vapor. The elastic material would watch its bottom rebound back to the hot plate, and this step would repeat 10 to 15 times per bounce. It’s all happening in a fraction of an instant.

The height of the 4-centimeter “sweet spot,” according to New Scientist, would differ depending on temperatures of the pan and formulations of the gel.