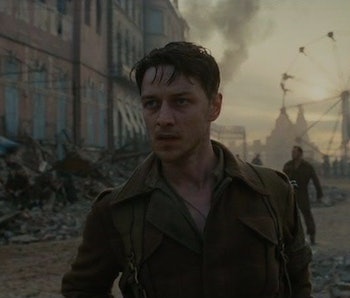 The Dunkirk evacuation was one of the most important moments in World War II, so it’s no surprise that the story of the desperate rescue of thousands of allied troops stranded across the English Channel with Nazi forces bearing down on them is being adapted into a movie. Christopher Nolan, the auteur behind The Dark Knight and Inception, chose to tackle the epic event for his latest film, Dunkirk. It’s getting amazing reviews, but it’s not the first great movie about the evacuation.

In fact, before this, there was an amazing movie about the Dunkirk evacuation that wasn’t really a war movie at all. It was the 2007 romantic drama Atonement.

Atonement, which starred James McAvoy, Keira Knightley, and Saoirse Ronan in her first major role, was based on a book by Ian McEwan. It tells the story of a romance between the eldest daughter of a wealthy family, Cecilia Tallis (Knightley) and the housekeeper’s son, Robbie Turner (McAvoy). Their relationship is horribly disrupted when Cecilia’s jealous younger sister, Briony, through a combination of coincidence and immature malice, incorrectly identifies Robbie as the man who assaulted a visiting cousin.

Robbie is sent to prison, though he agrees to join the army in World War II to expedite his release from prison, hoping it will help him get back to Cecilia. While fighting in France, he is separated from his unit, and he makes it to the beach of Dunkirk where thousands of troops are awaiting evacuation. He’s got an infected wound, and he’s desperate to get home.

That’s when Atonement’s director, Joe Wright, hits you with a five-minute-long unbroken shot of Robbie wandering around the crowded beach.

It’s an amazing feat of camera work and extra wrangling, and it’s a hugely emotional scene — especially because it doesn’t really move the main plot of Atonement forward at all. It just sets a mood, establishing how strange, alien, and hauntingly beautiful this place is, a place Robbie shouldn’t be.

Dunkirk undoubtedly has more action than Atonement. The movies are doing different things. But Atonement, in one masterful scene, captures the eerie calm before the storm. There are people singing, climbing, and playing on a broken merry-go-round. They’re having perverse fun, even as their fellow soldiers are grievously injured or executing horses — all while the Germans march at their backs. It’s surreal, because, what else can they do?

If you haven’t seen it, we won’t spoil the ending of Atonement. But, for a bit, it nails the horror of war by exploring an unsettling serene moment within the conflict.

Dunkirk opened in London on July 13.

More like this
Entertainment
5.12.2022 12:00 PM
50 years ago, Andrei Tarkovsky made the most disturbing sci-fi movie ever
By Andy Crump
Entertainment
5.13.2022 11:30 AM
You need to watch the most thrilling South Korean time-travel movie on Netflix ASAP
By Nam Cheah
Entertainment
5.6.2022 3:03 PM
Doctor Strange 2 incursions could set up an X-Men-Avengers crossover movie
By Eric Francisco
Related Tags
Share: