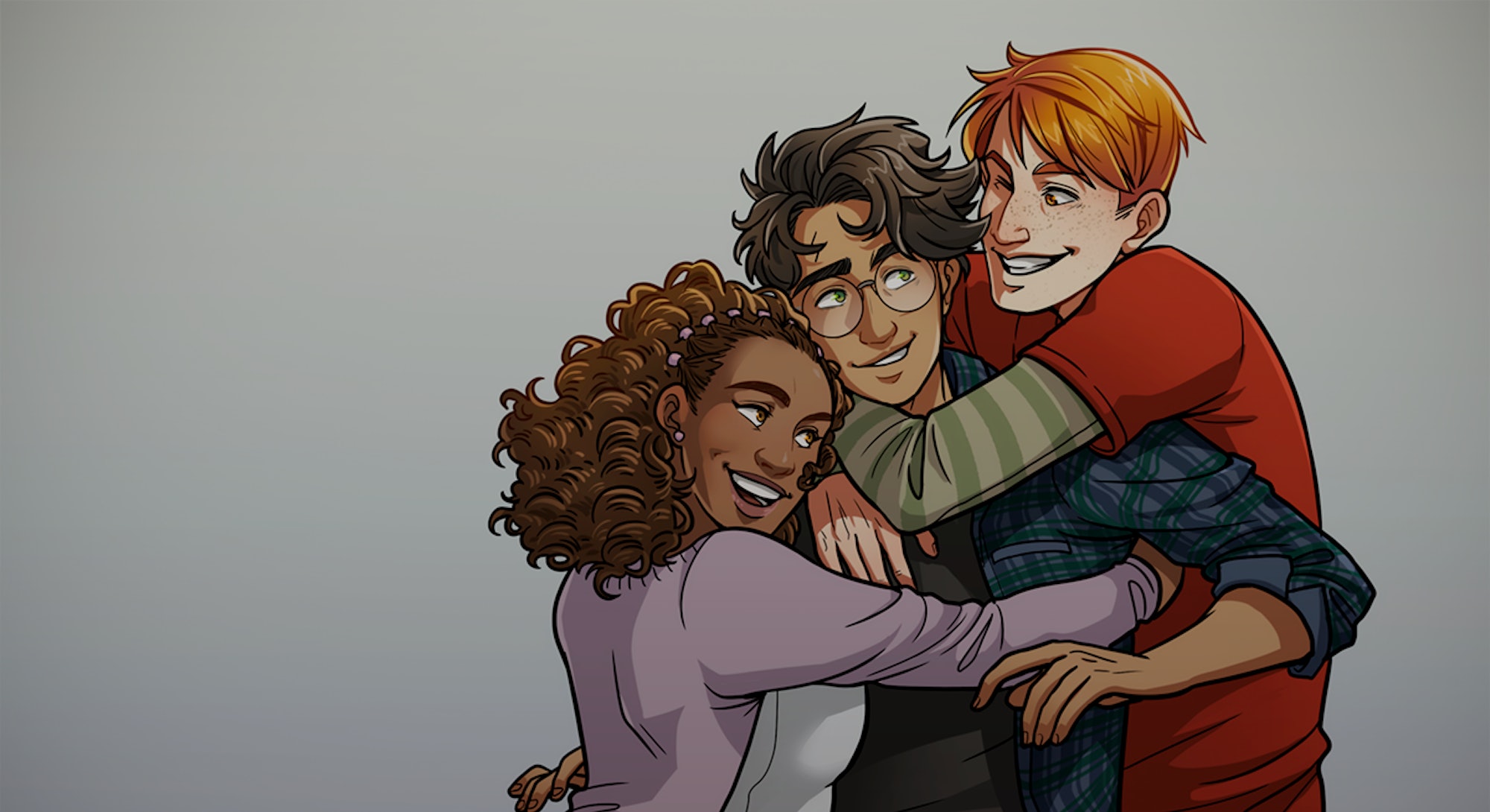 The Harry Potter fandom, as expansive, invested, and out of its mind as it can be, has taken it upon itself to improve and change J.K. Rowling’s original works since the beginning. Rowling created a host of beloved characters and established an entire world for fans to dive into when Harry Potter and the Sorcerer’s Stone came out 20 years ago. And, since its birth, the fandom has been tearing apart and then stitching Rowling’s work up again in its own image.

Canon (established facts and events) might not always be to a fan’s liking. That’s where fanon (fan-established canon) comes in as a way for fans to further connect with a favorite topic by diversifying and developing it. Inverse spoke with Harry Potter fan artist artists who are subverting expectations of Harry Potter characters’ races — known online as “racebending” — in order to make them more relatable and realistic in our own world.

It’s not unusual; fandoms are, perhaps confusingly, just as obsessed with changing things to their liking as they are about the importance of canon. Harry Potter fans have been reimagining Rowling’s characters — especially the “Golden Trio” of Harry Potter, Ron Weasley, and Hermione Granger — for years, drawing, writing, and characterizing them as different races, ethnicities, religions, sexualities, and genders from those assigned to them (or, often, not assigned to them) in Rowling’s books and the subsequent eight films.

“There are always positive and negative comments in spite of the way I draw those characters,” fan artist Nat (who goes by Natello on DeviantArt) tells Inverse via direct message about online response to their work, which often racebends Harry and Hermione, as well as James Potter and Sirius Black. “I remember someone called me names after I’d drawn black Hermione for the first time, but these were ancient times. I think people get used to more diverse depictions of those characters, or generally, the fact that others can imagine fictional characters differently. They do, don’t they? … I hope they do.”

Most of the characters in the Harry Potter series don’t actually have a specified race, as Rowling doesn’t delve into the subject, preferring to use “purity” of wizarding blood as a stand-in for any sort of racial tension in the wizarding world. Hermione, a “mud blood,” is considered lesser than for her Muggle-born status by “pure” wizards such as the Malfoy family. Real-world ideas of race are really only pushed onto the characters of Cho Chang (controversially assumed to be of Eastern Asian descent due to her stereotypical name) and the Patil twins, Padma and Parvati (as Patil is both an Indian title and surname), but, still, nothing is ever outright said in Rowling’s seven novels.

Meanwhile, everyone else is just assumed to be white.

The majority of the characters in the movies didn’t help with that assumption, cast as white, British kids, but it’s also how Western culture works; white and straight is the default, so, of course, that’s how the characters were interpreted onscreen. And while calls for greater, more realistic diversity in media existed in 1997 and 2001 when the first book and movie came out, respectively, things are a bit different in 2017; fans are getting louder. More than ever, Potter fans are attempting to better reflect the real world in a beloved fictional one.

“People create racebent characters to see themselves in work they love and identify with,” the modulator (or “mod”) of the Tumblr blog Racebending Harry Potter, which showcases fan art and fiction that, yes, racebends the characters, tells Inverse via direct message. “It’s an entirely different lens, and you can look at their interactions in a completely different way.”

The lens widened, both minutely and by leaps and bounds, when the West End production of Harry Potter and the Cursed Child cast Noma Dumezweni, an English stage actor born in Swaziland to South African parents, as Hermione. Racists balked at the announcement, demanding to know why a black woman had been placed in a role they believed belonged solely to a white woman. Rowling’s response, that Dumezweni was “best for the job,” was swift and sharp.

“I had a bunch of racists telling me that because Hermione ‘turned white’ – that is, lost colour from her face after a shock – that she must be a white woman, which I have a great deal of difficulty with,” Rowling said. “But I decided not to get too agitated about it and simply state quite firmly that Hermione can be a black woman with my absolute blessing and enthusiasm.”

It’s unclear how deep Rowling has delved into the fan community, but fan artists are incredibly fond of racebending Hermione to be a black woman.

Both Nat and the mod of Racebending Harry Potter named a fan artist, Katie, who goes by loquaciousliterature on Tumblr as a favorite of theirs. In the FAQs section on Katie’s blog, the first question she answers is why she often draws Hermione as black and Harry as Indian, writing: “Because I saw some really cool art by other amazing artists that depicted them as people of color, and because they’re never explicitly described as being white in the books. I thought it was a cool departure from the movies, and I liked that it challenged how I viewed the characters!”

As for how Rowling herself views the characters, both Racebending Harry Potter’s mod and Nat agreed that Rowling probably saw most of the characters as white when she wrote them. But, honestly, that doesn’t mean much in a fandom as diverse and globe-spanning as Harry Potter’s, especially when that fandom has raged on for 20 years beyond it’s final canon entry and its creator is keen on constantly adding to the story.

“I usually get people who are really excited that this exists, honestly,” Racebending Harry Potter’s mod said of their blog. “On very few occasions, I get told that I’m reverse racist or that I’m erasing authorial intent, but as a rule, I think if a character MUST BE WHITE you need to look at why that is. And then question it… I think we should question why we need to always take the path of least resistance, or why we want to change characters. Is it for empathy’s sake? Or is it for the sake of Eurocentric beauty standards and inner uncovered racist biases that we need to work to [reprogram]?”

Racebending, genderbending, and similar fandom practices did not start with the Potter fandom, nor does it stay solely within fan culture. Doctor Who, another British fiction staple, just made history by announcing its first female lead in the titular role; Lucy Liu portrays both a race- and genderbent Dr. Watson on Elementary.

Mixing up audience expectation of well-known characters isn’t just a way to make a product more inclusive (or “politically correct,” as internet trolls are obsessed with pointing out), it’s also a fantastic, creative way to challenge society to self-analyze. Why, these artists and blog runners ask with their work, are you so attached to a fictional character being white? Why did you imagine a character as white when you first read Rowling’s words, especially when there’s no description of skin color?

These aren’t innocent questions. If anything, racebent fan art proves that audience and individual interpretation is far more relevant than authorial intent after 20 years; something as integral at this point to the cultural zeitgeist as Rowling’s series now belongs more so to its fans than its creator. Let’s see what happens in another 20 years.