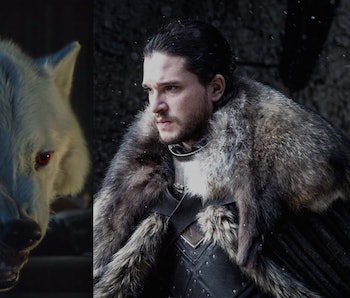 Because Game of Thrones is bursting with characters, each season involves a give-and-take about who gets screen time. As the Season 7 premiere “Dragonglass” shows, the seventh and penultimate season will focus heavily on those currently in power: Jon Snow, Daenerys Targaryen and Cersei Lannister. But there are other plot-relevant, important characters who aren’t getting enough credit: creatures.

In the past, the show has not had a great track record with animals. Tommen’s infamous cat Ser Pounce hasn’t appeared since Margarey Tyrell (RIP) paid both boy and cat a nocturnal visit in Season 4. Is he still alive, or was he in the Sept of Baelor when Cersei blew it up in Season 6? This might remain a mystery to be addressed in the Game of Thrones spinoffs.

Season 6 was also absolutely brutal on the Stark Direwolves, killing Bran’s wolf Summer and Rickon’s wolf Shaggydog in one fell swoop. To add insult to injury, both wolves had been largely absent from the story before their untimely ends.

But there’s reason to hope that Season 7 is the time creatures and pets will truly shine.

Season 7 will be the season Dany’s dragons are more important than ever. Previously, Drogon, Rhaegal, and Viserion have been cool accessories and useful war tools. They’ve incinerated her enemies at convenient moments, and had the occasional bonding moment with their mother.

But Season 7 will up the ante because they’ll be in Westeros. Half the population doesn’t think dragons are still a thing, so their sheer presence will be shocking. They also symbolize the return of House Targaryen in a huge way. Since Jon Snow is Rhaegar Targaryen’s son, it will be crucial to see how Dany’s dragons respond to the King in the North. Assuming he meets the dragons before Bran Stark can tell him the news about his real parents, their reaction might clue him in faster than any word of mouth can.

On the direwolf front, Ghost might seem like the last remaining wolf, but the end of Season 6 saw Arya return to Westeros after two seasons away. In Season 1, she sent her wolf Nymeria off into the forest. She’s presumably still alive, and the two could be heading towards an epic reunion. If that’s the case, Nymeria would be an unexpected asset in the wars to come.

Many fans are preoccupied with who will ultimately sit on the Iron Throne in the end, or what havoc White Walkers will wreak the further south they move. But don’t discount the importance of animals to the Season 7 story.