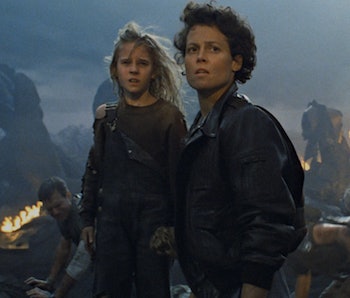 If and when the sequel to Alien: Covenant materializes, it’s possible the canon of the original two films will start to match-up. And now, director Ridley Scott says that Ripley’s parentage will be revealed in the next film, but maybe the one after that.

On July 1, Alien super-fan “Luis Nostromo” posted a clip of himself on Instagram interviewing Ridley Scott. In the clip, Scott responds to the question of a CGI de-aged Sigourney Weaver appearing in the next film as Ripley. While Scott says that idea is “possible,” he seems to indicate it’s more likely that Ripley’s mother will be revealed. “Ripley’s going to be someone’s daughter,” Scott said. “I think you’re two films out from even considering her.”

By “her” Scott seems to mean Ripley herself. But what about her mother? Could audiences have already met Ripley’s mother in the form of crewman Daniels (Katherine Waterston)? When we last saw the android David on the colony ship Covenant, there were a lot of frozen human embryos. Could one of them have been Daniels’s baby, and could that baby be Ripley?

Despite a disappointing haul at the box office, Ridley Scott seems confident that the subsequent Alien films will in fact happen.

Right now, Alien: Covenant is set for a Blu-ray and DVD release on August 15.